Match the following and mark the correct option.

The answer is the option (b) Ribs are attached to sternum.

What is the type of movable joint present between the atlas and axis?
(a) Pivot (b) Saddle (c) Hinge (d) Gliding

The answer is the option (a) Pivot joint: Between atlas and axis called atlanto-axial joint.

The answer is the option (c) Myosin.

The answer is the option (c) Mammals.

The answer is the option (d) Cervical—thoracic—lumbar—sacral—coccygeal
as it shows the correct sequential order of vertebrae in the vertebral column of human beings.

The answer is the option (d) Knee joint and elbow joints are examples of hinge joint.

The answer is the option (c) Amoeboid movements

Which one of the following is not a disorder of bone?
(a) Arthritis
(b) Osteoporosis
(c) Rickets
(d) Atherosclerosis

The answer is option (d) Atherosclerosis which is in fact a disorder affecting the circulatory system.

The answer is the option (c) The muscles located in the inner walls of alimentary canal are non- striated and involuntary.

The answer is the option (b) Head of humerus bone articulates with glenoid cavity of pectoral girdle.

The answer is the option (b) Muscles of the heart i.e. the Cardiac muscles.

Match the followings and mark the correct option.

Name the cells/tissues in human body which
(a) Exhibit ameboid movement
(b) Exhibit ciliary movement.

Sarcolemma, sarcoplasm and sarcoplasmic reticulum refer to a particular type of cell in our body. Which is this cell and to what parts of that cell do these names refer to?

Label the different components of actin filament in the diagram given below:

The correct sequence beginning from ear drum is malleus, incus, and stapes.

What is the difference between the matrix of bones and cartilage?

Which tissue is affected by Myasthenia gravis? What is the underlying cause?

Skeletal muscle. It happens due to immune disorder.

How do our bone joints function without grinding noise and pain?

The joints are enclosed in a capsule filled with a lubricating fluid. This helps in the movement of joints without causing any pain and grinding noise.

Give the location of a ball and socket joint in a human body.

It is present between the femur and pelvic girdle and also between the humerus and pectoral girdle.

Our forearm is made of three different bones. Comment.

The three different bones making-up a human forearm are umerus, radius and ulna.

(a) Each rib has two articulation surfaces at its dorsal end and are calledbicephalic ribs.
(b) First seven pairs of the ribs are known as the true ribs. They are dorsally attached to the thoracic vertebrae and to the sternum ventrally.
(c) Last two pairs of ribs are not connected ventrally and are called floating ribs.

In old age, people often suffer from stiff and inflamed joints. What is this condition called? What are the possible reasons for these symptoms?

This condition is known as Rheumatoid Arthritis and it is caused due to wear and tear of the joint. The possible symptoms being,
- Smoking
- Lack of Vitamin D in the diet
- Genetic factors
- Synovial membrane inflammation

(a) It will cause reduced heart rate and increased contractility of heart.
(b) it will cause tetani which is manifested as rapid spasms in muscles.

Name at least two hormones which result in fluctuation of Ca ++ level.

The answer is the option (c).
When someone starts rigorous exercise, he builds up muscles. It is true that fat is burnt during exercise but the rate of muscle building up may be more than the rate of burning of fat. This is why Rohit has gained weight.

Radha was running on a treadmill at a great speed for 15 minutes continuously. She stopped the treadmill and abruptly came out. For the next few minutes, she was breathing heavily/fast.

Answer the following questions.
(a) What happened to her muscles when she did strenuous exercise?
(b) How did her breathing rate change?

Write a few lines about Gout.

Gout is the recurrent attack of an acute inflammatory arthritis. It usually affects the big toe and other joints. This happens due to accumulation of uric acid crystals in joints, tendons and the surrounding tissues.

What is the source of energy for muscle contraction?

What are the points for articulation of Pelvic and Pectoral girdles?

Calcium ion concentration in blood affects muscle contraction. Does it lead to tetany in certain cases? How will you correlate fluctuation in blood calcium with tetany?

An elderly woman slipped in the bathroom and had severe pain in her lower back. After X-ray examination doctors told her it is due to a slipped disc. What does that mean? How does it affect our health?

A rubber-like disc is located between each consecutive vertebra working like a shock absorber. Sometimes, the disc gets displaced and the condition is called slipped disc or prolapsed disc. Slipped disc can severely affect the quality of life of the patient. It puts pressure especially on the nerve coming out of the vertebral column, causing severe pain in the back as well as numbness in the area which is under control of the affected nerve.
Slipped disc can also cause sciatica pain. The pain begins from the upper thigh and goes up to the lower legs. Sometimes, pins and needle sensation also persist for a long duration.

As per Sliding filament theory, when actin and myosin filaments slide towards each other, muscle contraction takes place. 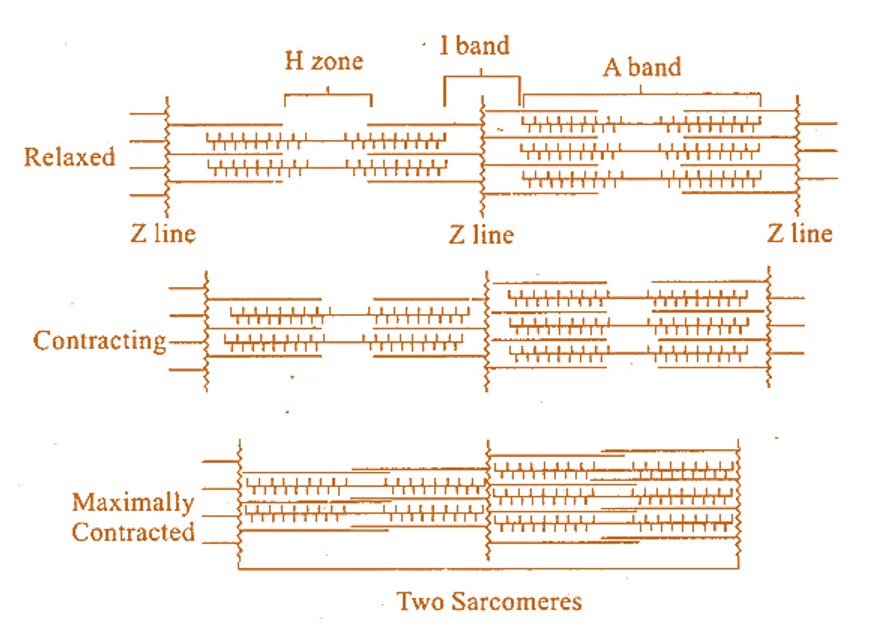 How does a muscle shorten during its contraction and return to its original form during relaxation?

Relaxation of muscles happens, when actin and myosin filaments slide away from each other. The striations appear in the striated muscles, due to the alternate bands of myosin and actin. The band of actin, i.e. the I band, is light in colour and with an elastic band called Z line, it is held in the middle. The myosin band has a darker colour and is called the A band and by an elastic band called M line, it is held in the middle.

Discuss the role of Ca 2+ ions in muscle contraction. Draw neat sketches to illustrate your answer.

Calcium ions play an important role in muscle contraction. There are minute channels in muscle cells through which the calcium ions enter, known as calcium channels. When a neurotransmitter enters the muscle cell, it initiates action potential. As a result, calcium channels open and allow entry to calcium ions. Calcium ion binds to the troponin on action filament. This results in removal of masking from the active site on myosin. Myosin then utilizes energy from ATP and moves towards actin to form a cross-bridge. This subsequently results in actin sliding towards each other and eventually muscle contracts. After that, the calcium ions move out from the muscle cells and actin filaments move back to their original position. This results in relaxation of muscle. 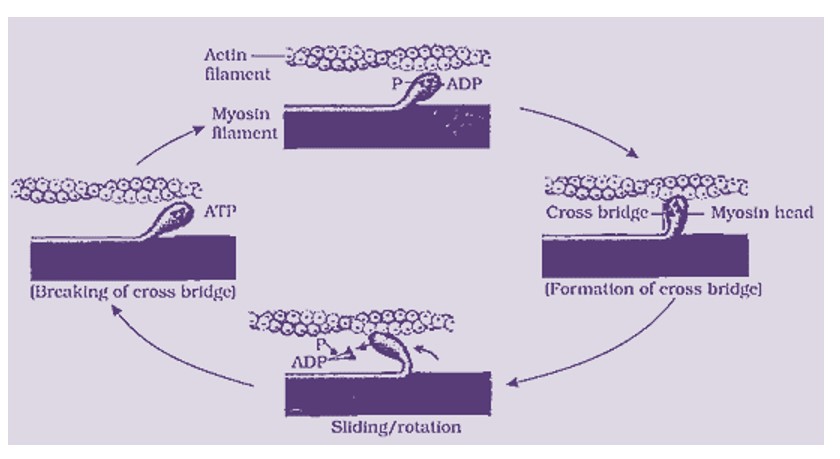 Differentiate between Pectoral and Pelvic girdle.

The movement of flagella, cilia, and tentacles has been represented by many organisms. Human beings can move their jaws, eyelids, limbs, and tongue, among others, and some of the movements can lead to change in place or location.

Thus, movements of any organism which leads to change in a physical location are called locomotion. Some examples of locomotor movements are walking, swimming, running, climbing, flying, and more.

For example, cilia are helpful in the movement of food in paramoecium, whereas Hydra uses its tentacles to capture its prey and also uses the tentacles for locomotion.

Human beings use their limbs to change body posture and to move. These are some of those observations that show movement and locomotion cannot be studied separately. Perhaps the two are interlinked by the fact that all locomotions are movements, but all movements are not locomotion.

Whereas the movements of animals vary with their habitat as per the demand of the situation. Generally, the locomotion by animals is for shelter, mate, the search of food/prey, suitable ground, favourable surroundings to live, to hide from their enemies/predators.

Check Chapter-Wise Solutions of Questions Given in Book:

Question: Are these solutions available offline?

Question: Are these solutions helpful in school exams?

Yes, these NCERT exemplar solutions for Class 11 Biology chapter 20 locomotion and movements help learn how to solve answers in exams so that they can score better.

Question: Are these questions solved by subject experts?

Yes, we have the best teachers working dedicatedly to bring the latest patterns NCERT Exemplar Class 11 Biology solutions chapter 20 to the NCERT questions.

Question: Why locomotion and movements an important chapter?

This chapter covers the topics related to the bone structure, skeletal system, muscles, and joints and how the body moves.