2.1 Flower - A Fascinating Organ of Angiosperms

In case, you have any doubt or query in solving these questions then CBSE NCERT Solutions for Class 12 Biology Chapter 2 Sexual Reproduction in Flowering Plants will help you to solve them.

Q1. Name the parts of an angiosperm flower in which development of male and female gametophyte take place.

The correct developmental sequence is as follows:

Q4. With a neat, labelled diagram, describe the parts of a typical angiosperm ovule.

The diagram of a typical angiosperm ovule is as follows: 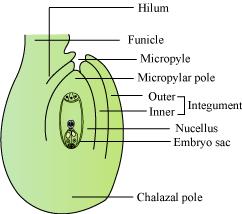 Q5. What is meant by monosporic development of female gametophyte?

Q6. With a neat diagram explain the 7-celled, 8-nucleate nature of the female gametophyte.

The diagram of 7- celled 8- nucleate embryo sac of plants is as follows:

The female gametophyte of plants is formed from a single functional megaspore with the help of four unequal mitotic divisions. These mitotic divisions give rise to 8 nuclei. Later, these nuclei assemble into 7 cells. To both chalazal and micropylar end three cells each move. The three cells at chalaza are called antipodal cells while those at micropylar end constitute egg apparatus. The egg apparatus includes two larger cells called synergid while the egg is the smallest cell that acts as a female gamete.

Protandry- Anthers mature earlier than the stigma of the same flower. So, even if the pollens fall on these stigmas, they are unable to germinate. E.g. sunflower, Salvia.

Protogyny- Stigmas mature earlier than anthers and get pollinated by mature pollen grains of other flowers. E.g. Mirabilis jalapa.

Self-incompatibility refers to the genetic inability of fully functional pollen grains and ovules to produce viable seeds. This is mainly due to the presence of S or self genes. If these genes are present in pollen as well as ovule, they will not be able to produce viable seeds. Self-pollination does not lead to the formation of seeds in self-incompatible species due to the presence of certain chemical substances that block the germination of pollen grains on stigma and also obstruct their passage to the ovary.

Q10. What is bagging technique? How is it useful in a plant breeding programme?

Bagging technique - Bagging refers to covering of emasculated flowers with the help of butter paper or plastic bags to avoid contamination of stigma of these flowers to undesired pollens.

The process of triple fusion occurs in the central cell of embryo sac. The pollen tube delivers one nucleus to the egg cell while the other one migrates to centre and fuses polar nuclei.

In triple fusion, two polar nuclei and one male gamete are involved.

Q12. Why do you think the zygote is dormant for sometime in a fertilised ovule?

(a) hypocotyl and epicotyl

The differences between hypocotyl and epicotyl are as follows:

The differences between coleoptile and coleorrhiza are as follows:

The differences between integument and testa are as follows:

The differences between perisperm and pericarp are as follows:

Q14. Why is apple called a false fruit? Which part(s) of the flower forms the fruit?

The parts of flower that take part in fruit formation are ovary, thalamus etc.

Q15. What is meant by emasculation? When and why does a plant breeder employ this technique?

The process of removal of anthers from the flower with the help of forceps without affecting the female reproductive parts is called emasculation. This technique is used by plant breeders to allow suggestive breeding between plants in order to produce plants with desired seeds. Hence, it can be used to prevent self-pollination or prevent cross-pollination according to the need of the breeder.

Q17. Explain the role of tapetum in the formation ofpollen-grain wall.

Tapetum is the nutritive innermost layer of microsporangium that provides nutrition to the developing microspores. The role of tapetum in the formation of pollen grain wall is as follows:

Q18 . What is apomixis and what is its importance?

Question: What are the three fertilisation mentioned in this chapter?

Question: What are the important topics which are mentioned in NCERT class 12 biology chapter 2 sexual reproduction in flowering plants?

These are the important topics which are mentioned in NCERT solutions for class 12 biology chapter 2 sexual reproduction in flowering plants:

Question: Why you should use NCERT solutions for class 12 biology chapter 2 sexual reproduction in flowering plants?

Question: What are the difference between coleoptile and coleorrhiza ?

The differences between coleoptile and coleorrhiza are as follows:

Kerala Plus Two Question Papers 2020 is provided here to downl...

Assam HS Routine 2021 - Assam Board will release the AHSEC exa...

In aquatic plants like Pistia and Eichhornia, leaves and roots are found near _____.
Out of NaCl and AgCl, which one shows Frenkel defect and why?
Answer me everyone This is about matter
A bus decreases its speed from 80km/h to 60km/h in 5 secs. find the acceleration of the bus?
Eh
Find the H.C.F of 12, 15 and 21 using the prime factorisation method.
What are high and low tide
Name three groups of plants that bear archegonia. Briefly describe the life cycle of any one of them.
If the moon attracts the earth,why does the does the earth not move towards the moon
what shape is a your instrument box b a brick c a match box d a road roller a sweet laddu
View All Questions