In NCERT solutions for 12 biology chapter, you will also get answers to such questions which has been asked from the interesting topic that is Gene therapy. Biotechnology and its applications class 12 ncert pdf will tell you that gene therapy is the insertion or injection of genes into an individual’s cells and tissues to treat a kind of diseases, like hereditary diseases. It can be performed by replacing a defective mutant allele with a functional targeted gene or allele which involves gene amplification. To know more about this processer, you have to go through biotechnology and its applications ncert pdf questions and answers.In case, you have any doubts or queries in solving these questions then the 12 biology chapter will help you to solve them.

Q1. Crystals of Bt toxin produced by some bacteria do not kill the bacteria themselves because-

(a) bacteria are resistant to the toxin

(b) toxin is immature

The Bt toxin remains inactive in the bacteria. It gets activated after entering the insect gut due to the alkaline pH of the gut.

Q2. What are transgenic bacteria? Illustrate using any one example.

Transgenic bacteria are the bacteria whose genes have been manipulated by transferring foreign genes into its genome through recombinant DNA technology. For example, transgenic E.coli was developed by introducing in it, two DNA sequences of A and B chains of human insulin in order to produce insulin to treat diabetic patients.

Q3. Compare and contrast the advantages and disadvantages of production of genetically modified crops.

1. GM crops can be developed for increasing the nutritional quality of crop products. For example golden rice with enhanced vitamin, A content is a GM crop.

2. Many GM crops are developed to have insect pest resistance, thus, decreasing our dependence on chemical-based insecticides/pesticides.

3. GM crops are made to be highly tolerant of environmental conditions.

GM crops possess some disadvantages also. The presence of a transgene in commercial crops endangers wild species. The gene for Bt toxin expressed in pollen endangers pollinators such as honeybees. These crops supply allergens and transfer antibiotic resistance markers. They are damaging to the genetic environment.

NCERT solutions for class 12 biology chapter 12 biotechnology and its applications:

Q4. What are Cry proteins? Name an organism that produces it. How has man exploited this protein to his benefit?

Cry proteins are toxin protein encoded by cry genes. These are produced by a bacteria named Bacillus thuringiensis which itself remain safe from cry toxins b y having methylated DNA. Cry proteins act as insecticides as they are toxic to insects. This property of Cry proteins has been exploited in producing genetically modified crops such as Bt cotton, Bt brinjal etc. These crops are resistant to insects of order Lepidoptera.

Gene therapy refers to a collection of methods and technologies allowing correction or replacement of a defective or dysfunctional gene. While correcting, a normal gene is transferred into the individual's embryo to replace and perform the function of the original defective gene. One well-established example of gene therapy is ADA deficiency. This is caused by the deletion of a gene encoding for enzyme adenosine deaminase. The gene therapy for ADA deficiency was carried out in a 4-year-old patient by the following method:

1. The lymphocytes of a patient were grown in a culture in vitro.

2. A functional ADA cDNA was introduced in these lymphocytes using a retroviral vector.

3. The transformed lymphocytes were introduced back into the blood of the patient.

4. The patient is regularly infused with transformed lymphocytes

5. For a permanent cure of ADA deficiency, a gene isolated from bone marrow cell is introduced in the patient in the early stage.

Q6. Diagrammatically represent the experimental steps in cloning and expressing a human gene (say the gene for growth hormone) into a bacterium like E. coli? 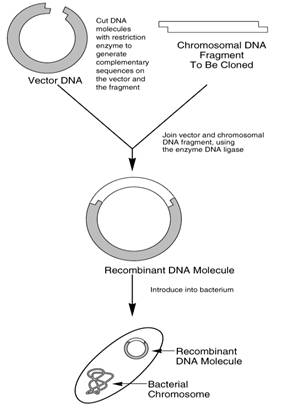 Q7. Can you suggest a method to remove oil (hydrocarbon) from seeds based on your understanding of rDNA technology and chemistry of oil?

Q8. Find out from internet what is golden rice.

Golden rice is a variety of rice crop, genetically engineered to synthesise beta carotene which is a precursor of vitamin A. The normal rice produces beta carotene but in leaves, to increase the production of vitamin A, beta carotene should be synthesised in the endosperm. Golden rice was developed by transferring two beta-carotene biosynthesis genes into the rice genome. These genes include psy (phytoene synthase) from a plant named Narcissus pseudonarcissus (daffodil) and crtI (phytoene desaturase) from the soil bacterium Erwinia uredovora. These genes were under endosperm-specific promoter so that they will show expression in the endosperm.

NCERT solutions for class 12 biology chapter 12 biotechnology and its applications:

Q9. Does our blood have proteases and nucleases?

Proteases and nucleases are two enzymes that catalyse the hydrolysis of proteins and nucleic acids respectively. These enzymes are not found in blood, instead, blood contains protease inhibitors protecting the proteins being broken down. Similarly, nucleases are also absent in blood.

Q10. Consult internet and find out how to make orally active protein pharmaceutical. What is the major problem to be encountered?

Orally active protein pharmaceuticals contain biologically active proteins, peptides etc. These are taken into the body by oral route in various formulations. The production of these protein pharmaceuticals involves encapsulation of proteins or peptides in liposomes using penetration enhancers. These proteins or peptides are used for the treatment of diseases and they can also be used as vaccines.

The major problem encountered in the administration of these pharmaceuticals is that they are ingested orally, and digested by the proteases present in the stomach before showing results. This is why such pharmaceuticals are directly ingested into the target site.

After going through the NCERT solutions for class 12 biology chapter 12 biotechnology and its applications, you must be able to understand all the answers of the questions mentioned in the above.

Three critical research areas of biotechnology which you should know for the solutions of NCERT for class 12 biology chapter 12 biotechnology and its applications are given below:

(ii) Creating optimal conditions through engineering for a catalyst to act, and

Important topics of NCERT solutions for class 12 biology chapter 12 biotechnology and its applications:

Benefits of NCERT solutions for class 12 biology chapter 12 biotechnology and its applications:

Question: How to download biotechnology and its applications class 12 ncert pdf?

To download biotechnology and its applications class 12 ncert pdf for 12 biology chapter , students can use the online webpage to pdf converter tools. To Score Well in the examination, follow the NCERT syllabus and exercise given in the NCERT Book. To practice more problems, students can refer to the NCERT exemplar.

Question: what are the Benefits of NCERT solutions for class 12 biology chapter 12 biotechnology and its applications?

The Benefits of NCERT solutions for class 12 biology chapter 12 biotechnology and its applications are:

The Shri Ram School Football Team recently participated in the...

Gandhi Jayanti - people across the country, celebrate every ye...

i couldnt clear 1st compartment (which held in August 2022) cbse class 12th so can I give improvement in all subjects which to be held on March 2023. tell me a solution i need more than 75% in class 12th

If You Want To Upskill Yourself and make your Carrier in Student Life Make a Difference.

You have to know that if you do this.

i was not able to clear 1st compartment and now I have to give 2nd compartment so can I give improvement exam next year? plz tell me very much tensed(cbse class 12th)

If you was not able to clear 1st compartment and now you giving second compartment so YES, you can go for your improvement exam next year but if a student receives an improvement, they are given the opportunity to retake the boards as a private candidate the following year, but there are some requirements. First, the student must pass all of their subjects; if they received a compartment in any subject, they must then pass the compartment exam before being eligible for the improvement.

As you can registered yourself as private candidate for giving your improvement exam of 12 standard CBSE(Central Board of Secondary Education).For that you have to wait for a whole year which is bit difficult for you.

Positive side of waiting for whole year is you have a whole year to preparing yourself for your examination. You have no distraction or something which may causes your failure in the exams. In whole year you have to stay focused on your 12 standard examination for doing well in it. By this you get a highest marks as a comparison of others.

Believe in Yourself! You can make anything happen

All the very best.

I got an RT for 2 subjects, so do I have to give exams for all the subjects in the coming year or just the 2. pls help me

I will have my boards in Feb 2023 (Class 12) and I still havent completed 1 chapter in any subject (Physics, chemistry and maths) , My 11th concepts are not that great but its okish, I wanted to know that If I do start studying from 15th of August Can I get above 85?

If you'll do hard work then by hard work of 6 months you can achieve your goal but you have to start studying for it dont waste your time its a very important year so please dont waste it otherwise you'll regret.