NCERT solutions for class 11 biology chapter 21 neural control and coordination: You may have learnt in earlier classes, that the functions of our organs and organ systems in our body have been coordinated with the neuron system. CBSE NCERT solutions for class 11 biology chapter 21 neural control and coordination will also walk you through the fact that how the supply of oxygen increases while performing physical activities. For example, when you do physical exercises, you will see the energy demand is increased for maintaining an increased muscular activity. And this increased supply of oxygen necessitates an increase in the rate of respiration, heartbeat and increased blood flow via blood vessels. When you stop the physical exercise, the activities of nerves, lungs, heart, and kidney gradually return to their normal conditions. Thus, in NCERT solutions for class 11 biology chapter 21 neural control and coordination you will get answers from the topics related to the functions of muscles, lungs, heart, blood vessels, kidney, and other organs. You will study that neural system and the endocrine system jointly coordinate and integrate the activities of all the organs so that they function in a synchronized manner. If you are looking for an answer from any other chapter even from any other class then go with NCERT Solutions , there you will get all the answers of NCERT easily.

After going through solutions of neural control and coordination NCERT, you must be able to understand all the answers the following questions:

The brain is the main coordinating center of the body. It is a part of the nervous system that controls and monitors every organ of the body.

It is divided into three regions —

It is the main thinking part of the brain. It consists of the cerebrum, thalamus, and hypothalamus.

1. Cerebrum: The cerebrum is the largest part of the brain and constitutes about four-fifths of its weight. It is divided into two cerebral hemispheres by a deep longitudinal cerebral fissure. These hemispheres are joined by a tract of nerve fibre known as the corpus callosum.

2. Thalamus: Thalamus is the main center of coordination for sensory and motor signaling. It is wrapped by the cerebrum.

3. Hypothalamus: Hypothalamus lies at the base of the thalamus and contains a number of centers that regulate body temperature and the urge for eating and drinking. Some regions of the cerebrum, along with hypothalamus, are involved in the regulation of sexual behavior and expression of emotional reactions such as excitement, pleasure, fear, etc.

Midbrain:
It is located between the thalamus region of the forebrain and pons region of hindbrain. The dorsal surface of midbrain consists of superior and inferior corpora bigemina and four round lobes called corpora quadrigemina.

Eye: We know that eyes are in spherical structures that consist of three layers.

1. The outer layer is composed of sclera and cornea.

2. The middle layer of eye is vascular in nature and contains choroid, ciliary body, and iris.

3. The innermost nervous coat of eye contains retina. The retina is the innermost layer. It contains three layers of cells — inner ganglion cells, middle bipolar cells, and outermost photoreceptor cells. The receptor cells present in the retina are of two types — rod cells and cone cells.

Ear: Ear is the sense organ for hearing and equilibrium. It consists of three portions external ear, middle ear, and internal ear.

2. Middle ear: It is an air-filled tympanic cavity that is connected with pharynx through the eustachian tube. The eustachian tube helps to equalize air pressure in both sides of the tympanic membrane. The middle ear contains a flexible chain of three middle bones called ear ossicles. The three ear ossicles are malleus, incus, and stapes that are attached to each other.

The membranous labyrinth is divided into 2 parts.

(b) Resting potential and action potential

(a) Polarisation of the membrane of a nerve fibre

Polarisation of the membrane of a nerve fibre:

(b) Depolarisation of the membrane of a nerve fibre

(c) Conduction of a nerve impulse along a nerve fibre

(d) Transmission of a nerve impulse across a chemical synapse

4. Draw labelled diagrams of the following: 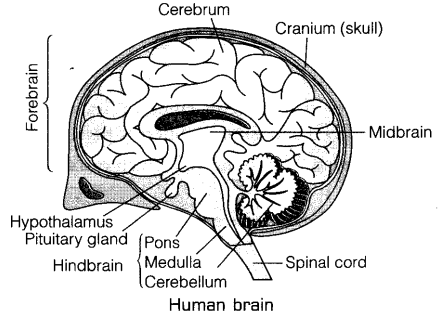 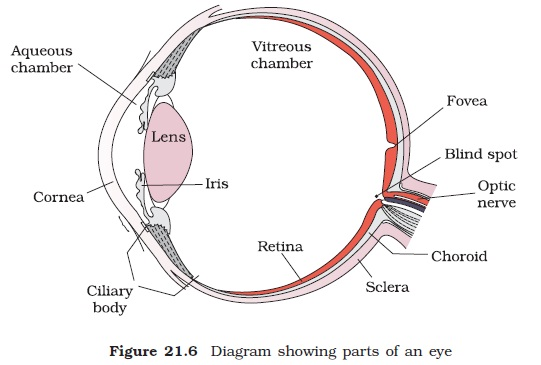 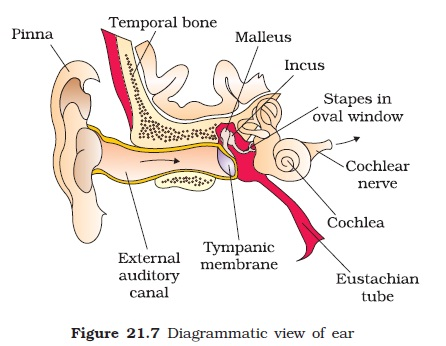 The forebrain consists of these three:

The midbrain consists of cerebral peduncles and corpora quadrigemina.

The hindbrain consists the cerebellum, pons varolii, and medulla oblongata:

(a) Mechanism of synaptic transmission

The mechanism of synaptic transmission at the electrical synapse:

The mechanism of synaptic transmission at the chemical synapse:

(b) Mechanism of vision

Mechanism of hearing is given below:

(a) How do you perceive the colour of an object?

Cone cells present in the retina of the eye are responsible for colour vision. There are three kinds of cone cells which respond to red, green and blue light. Different cone cells get stimulated at different wavelengths of light. The other colours are detected by the simultaneous stimulation of more than one kind of cone cells. When all the three types of cells are stimulated simultaneously, a sensation of white light is produced.

(b) Which part of our body helps us in maintaining the body balance?

(c) How does the eye regulate the amount of light that falls on the retina.

Light enters the eye through the pupil, an aperture present in the centre of the iris. The iris has two types of muscles-circular smooth muscles and radial smooth muscles-which regulate the amount of light which falls on the retina.

(a) Role of Na+ in the generation of action potential.

( b) Mechanism of generation of light-induced impulse in the retina.

The photosensitive compounds (photo pigments) in the human eye are composed of opsin and retinal. Light induces dissociation of retinal and opsin which changes the structure of opsin. It generates an action potential in the bipolar neurons. These impulses/action potential are transmitted by the optic nerves to the visual cortex of the brain where the neural impulses are analysed and the erect image is recognised.

(c) Mechanism through which a sound produces a nerve impulse in the inner ear.

From the perilymph, the vibrations are transferred to the scala vestibuli of the cochlea and then to the scala media through Reissner's membrane and stimulate the sensory hair of the organ of Corti. The impulses thus received by the hair cells are carried to the brain through the auditory nerve where the sensation of hearing is felt.

Q9. Differentiate between: (a) Myelinated and non-myelinated axons

Q9. Differentiate between: (b) Dendrites and axons

(a) Which part of the ear determines the pitch of a sound?

The cochlea determines the pitch of a sound.

(b) Which part of the human brain is the most developed?

The cerebrum is the most developed.

(c) Which part of our central neural system acts as a master clock?

The hypothalamus of the central neural system acts as a master clock.

Q11. The region of the vertebrate eye, where the optic nerve passes out of the retina, is called the
(a) fovea
(b) iris
(c) blind spot
(d) optic chaisma

The region of the vertebrate eye, where the optic nerve passes out of the retina, is called the blind spot. Photoreceptors are absent in this region.

21.3 Neuron as Structural and Functional Unit of Neural System

21.3.1 Generation and Conduction of Nerve Impulse

The CNS consists of the brain and spinal cord. The brain can be divided into three major parts:

The forebrain consists of the cerebrum, thalamus, and hypothalamus. The cerebrum is longitudinally divided into two halves that are connected by the corpus callosum. A very important part of the forebrain called the hypothalamus controls body temperature, eating and drinking.

Question: What are the benefits of NCERT solutions for class 11 biology chapter 21 neural control and coordination?

Question: What are the important topics of NCERT solutions for class 11 biology chapter 21?

These are the important topics of NCERT  solutions for class 11 biology chapter 21:

Question: What are the major parts of our brain?

Question: What are the difference between the dendrites and axon?