NCERT solutions for class 11 biology chapter 20 locomotion and movement: Movement is one of the significant features of all living beings as animals and plants exhibit a wide range of movements. You know that human beings can move their eyelids, limbs, jaws, tongue, etc and some of the movements result in a change of place or location. In the solutions for NCERT class 11 biology chapter 20 locomotion and movement, you will get questions related to such topics like locomotion and movements of our body part. Some voluntary motions like walking, running, climbing, swimming, flying are some forms of locomotory movements. Locomotory structures need not be different from those affecting other types of movements. For example, in Paramoecium, cilia help in the movement of food through cytopharynx and in locomotion as well. The methods of locomotion that are performed by animals vary with their habitats and the demand of the situation which you need to learn in deep as you will get related questions and solutions in NCERT solutions for class 11 biology chapter 20 locomotion and movement. However, locomotion generally takes place for the search of food, shelter, mate, suitable breeding grounds, favourable climatic conditions or to escape from enemies/predators. If you are looking for an answer from any other chapter even from any other class then go with NCERT Solutions, there you will get all the answers.

After going through the solutions for ch 20 bio class 11, you must be able to understand all the answers the following questions:

Q1. Draw the diagram of a sarcomere of skeletal muscle showing different regions. 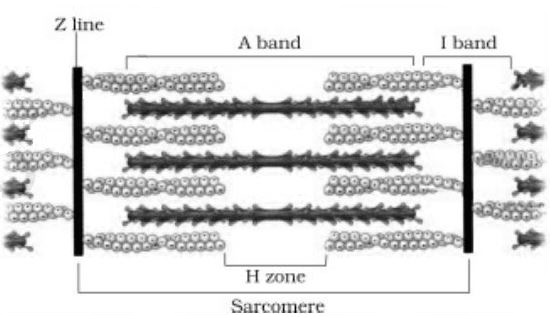 The process of muscle contraction includes the following events

2. Release of Calcium Ions- This step includes the transmission of the action potential by sarcolemma to the sarcoplasmic reticulum to release calcium ions in the sarcoplasm.

3. Conformational Changes in Actin Filaments- The calcium ions thus released binds to the troponin and tropomyosin on active filaments changing the three-dimensional shape of the actin–troponin-tropomyosin complex. This causes the active site for myosin which is found on the actin filament to be exposed.

4. Activation of Myosin Heads- Later on, the myosin heads also get activated and they release energy by the hydrolysis of ATP resulting in the binding of myosin heads to the active sites present on the actin filaments. This leads to the formation of actin-myosin cross-bridge.

5. Sliding of Actin Filaments over Myosin- After the formation of cross-bridges, the myosin head rotates to pull the actin filament towards the centre of the A-band, i.e. the H-zone. The Z-line attached to the actin filaments is also pulled inwards resulting in the contraction of the sarcomere. During contraction, the I-band shortens, while the A-band retains its length. This causes the muscles to contract.

Q4. Write true or false. If false change the statement so that it is true.

(a) Actin is present in thin filament
(b) H-zone of striated muscle fibre represents both thick and thin filaments.
(c) Human skeleton has 206 bones.
(d) There are 11 pairs of ribs in man.
(e) Sternum is present on the ventral side of the body.

(a) Actin is present in thin filament

(b) H-zone of striated muscle fibre represents both thick and thin filaments.

False statement. H -zone of striated muscle fibre is the central part of the thick filament that is not overlapped by the thin filament.

False statement. There are 12 pairs of ribs in a man.


(e) Sternum is present on the ventral side of the body.

(a) Actin and Myosin

The differences between actin and myosin are as follows:

(b) Red and White muscles

Q7. What are the different types of movements exhibited by the cells of human body

The different types of movements exhibited by the cells of the human body are as follows:

1. Amoeboid movement - The leucocytes present in the blood show amoeboid movement. During tissue damage, these blood cells move in an amoeboid manner (by forming temporary pseudopodia) from the circulatory system towards the site of injury to initiate an Immune response.

2. Ciliary movement- The reproductive cells such as sperms and ova show ciliary movement. The passage of ova through the fallopian tube towards the uterus is facilitated by this movement.

Q8. How do you distinguish between a skeletal muscle and a cardiac muscle ?

The differences between skeletal muscles and cardiac muscles are as follows:

(f) between pubic bones in the pelvic girdle

between pubic bones in the pelvic girdle ball and socket joints are present.

(a) All mammals (except a few) have seven cervical vertebra.
(b) The number of phalanges in each limb of human is 14.
(c) Thin filament of myofibril contains 2 ‘F’ actins and two other proteins namely troponin and tropomyosin.
(d) In a muscle fibre Ca++ is stored in sarcoplasmic reticulum.
(e) 11th and 12th pairs of ribs are called floating ribs.
(f) The human cranium is made of eight bones.

20.5 Disorders of Muscular and Skeletal System

Question: What are the benefits of the NCERT solutions for class 11 biology chapter 20 locomotion and movement?

Question: What are the important topics of locomotion and movement class 11 ncert solutions?

Question: What are the differences between skeletal muscles and cardiac muscles given in locomotion and movement class 11 pdf?

The differences between skeletal muscles and cardiac muscles are as follows:

Question: What is amoeboid movement as per locomotion ncert?

The leucocytes present in the blood show amoeboid movement. During tissue damage, these blood cells move in an amoeboid manner (by forming temporary pseudopodia)  from the circulatory system towards the site of injury to initiate an Immune response.