The shoot system is differentiated into stem, leaves, flowers, and fruits. In CBSE NCERT solutions for class 11 biology chapter 5 morphology of flowering plants, you will also study the morphological features of stems like the presence of nodes and internodes, multicellular hair and positively phototropic nature help to differentiate the stems from roots. If you are looking for an answer from any other chapter even from any other class then go with NCERT Solutions, there you will get all the answers of NCERT easily.

The modification of root found in

(b) Turnip- The roots of turnip are called napiform roots and they help in the storage of food.

(c) Mangrove tree- These possess roots that modify for the absorption of oxygen by growing vertically upwards from the soil. These types of roots are called pneumatophores.

Q2. Justify the following statements on the basis of external features:

(i) Underground parts of a plant are not always roots.

Roots of a plant are generally underground while the stem is present above the ground. However, it is not necessary that root is the only part of the plant to be found underground. In some specific conditions, stems are also found to be present in underground regions. For example, The stems in ginger and banana are underground and swollen due to the storage of food. They are called rhizomes. Similarly, the corm is an underground stem in Colocasia. Similarly, in peanuts, the flower after fertilization gets pushed inside the soil by growing a flower stalk. Hence, by this information, we can conclude that underground parts of a plant are not always roots.

Q2. Justify the following statements on the basis of external features:

(ii) Flower is a modified shoot.

After a certain period of growth, the apical meristem of a stem gives rise to the floral meristem. While the formation of the floral meristem, the axis of the stem gets condensed, and the internodes lie near each other. Various floral appendages arise from the node. A flower can be said to be a modified shoot because of the presence of nodes and internodes.

Q4. Explain with suitable examples the different types of phyllotaxy.

The pattern of arrangement of leaves on the stem or branch is called Phyllotaxy . There are three types of phyllotaxy found in plants.

1. Alternate phyllotaxy- On a branch, a single leaf arises at each node. E.g China rose

2. Opposite phyllotaxy- At one node, two leaves arise, opposite to each other. E.g guava plant 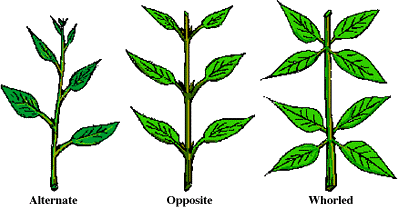 Aestivation- The mode of arrangement of sepals or petals in the floral bud with respect to the other members of the same whorl is called aestivation. Aestivation in plants can be valvate, Wisted, imbricate, and vexillary.

Placentation- The arrangement of ovules within the ovary is called placentation. There are five types of placentation found in plants including marginal, basal, parietal, axile, and free central placentation.

Actinomorphic- The flowers which can be divided into two radial halves by any radial plane passing through its centre are called actinomorphic flowers. E.g. chilly and mustard.

Zygomorphic- The flowers which can be divided into two similar halves by a single vertical plane only are known as zygomorphic flowers. E.g. pea and beans.

Superior ovary- When the gynoecium is present at the highest position, while other floral parts are arranged below it, the ovary is said to be a superior ovary. A flower with this arrangement is described as hypogynous. Examples include brinjal and mustard.

Perigynous flower- When the gynoecium is present in the centre while the rest of the floral parts are present at the rim of the thalamus at the same level as gynoecium, the flower is called perigynous flower. E.g. plum and rose.

(a) Racemose and cymose inflorescence

(b) Fibrous root and adventitious root

Q7. Draw the labelled diagram of the following: 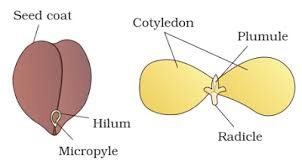 Q7. Draw the labelled diagram of the following: 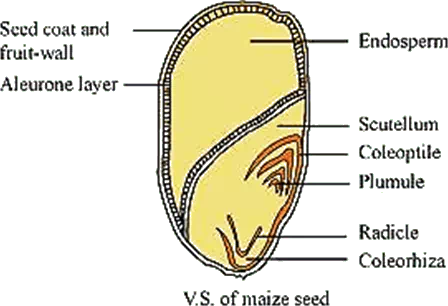 The major types of stem modifications are as follows:

3. Corm- It is a condensed form of rhizome growing in the vertical direction. It is more or less spherical with a flat base. Adventitious roots arise either from its base or all over the body. Examples- Colocasia, Amorphophallus.

6. Stolon- These are elongated horizontal runners which can cross over small obstacles. The tip of the stolon generally grows above the level of the ground. E.g. Jasmine, peppermint, wild strawberry etc.

7. Offset- They are one internode long small runners which are found in rosette plants at the ground level. E.g Pistia, Eichhornia etc.

8. Stem- tendrils- These are thread like sensitive structures that coil around a support and help the plant in climbing. E.g. grapevine.

10. Phylloclade- They are flattened or cylindrical green stems of unlimited growth which have taken over the function of photosynthesis. Formation of phylloclades helps the plants to grow in dry habitats. e.g. Opuntia, Casuarina etc.

11. Cladode- These are the green stem of limited growth which have taken over the function of photosynthesis from the leaves. The true leaves are reduced to scales or spines. E.g. Ruscus.

Placentation refers to the arrangement of ovules within the ovary of a flower. There can be 5 types of placentation in plants. These are as follows:

Q11. What is a flower? Describe the parts of a typical angiosperm flower.

Flower is the reproductive part of angiospermic plants for sexual means of reproduction. A typical flower has four whorls arranged on a swollen end of stalk or pedicel called thalamus. They are Calyx, Corolla, Androecium and Gynoecium.

1. Calyx- It is the outermost whorl of a flower. It is made up of units called sepals. It is generally green in colour and protective in function.

2. Corolla- It is the whorl present inner to the corolla. It consists of petals. The petals are brightly coloured to attract the insects.

3. Androecium- It is the whorl present next to the corolla. The androecium mainly consists of stamens which are the male reproductive unit of a flower. A stamen is composed of two parts i.e. anther and filament. The anther is the bilobed structure with a stalk called filament. Inside the anther, pollen grains are formed.

4. Gynoecium- The innermost whorl of a flower is called gynoecium. It consists of pistils. A pistil is composed of three parts stigma, style and ovary. Pistils are the female reproductive units of a flower. 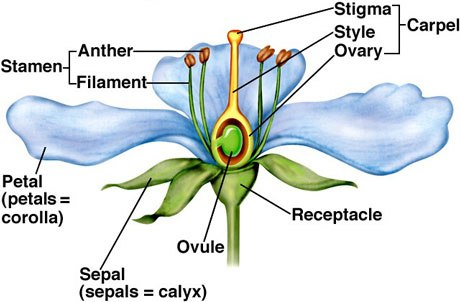 Q12. How do the various leaf modifications help plants?

Leaf is a green, lateral and flattened outgrowth which is borne on the node of a stem or its branches is specialized to perform photosynthesis. Apart from photosynthesis, leaves often modify to perform several other functions also. Some of the modifications of leaves in plants that help the plants are as follows:

1. Tendrils- The leaves of the plants may modify into tendrils that help the plants in climbing

2. Spines- These are hard and stiff structures that act as organs of defence. e.g. cactus

3. Phyllode- The leaves of some plants are short-lived and they are soon replaced by flattened, green structures called phyllodes. These arise from the petiole of the leaves and involved in synthesising the food.

4. Pitcher- The leaves of the pitcher plant are modified into pitcher-like structures. These contain digestive juices and help in trapping and digesting insects.

Q13. Define the term inflorescence. Explain the basis for the different types of inflorescence in flowering plants.

The floral formula of an actinomorphic, bisexual, hypogynous flower with five united sepals, five free petals, five free stamens and two united carpels with the superior ovary and axile placentation is as follows:

Q15. Describe the arrangement of floral members in relation to their insertion on thalamus.

There can be three types of arrangements of floral members in relation to their insertion on the thalamus. These are as follows:

1. Hypogynous – Ovary occupies the highest position while the other parts are situated below the ovary. The ovary in such case is called superior. Eg. Mustard, brinjal and China rose. Flowers with this arrangement are called hypogynous flowers.

2. Perigynous -In this arrangement, the gynoecium is situated at the centre and other parts are on the rim at the same height. Such ovary is called half-inferior and flowers are called perigynous flowers.

3. Epigynous- In this arrangement, the ovary is situated below all the other parts. The ovary, in this case, is said to be inferior while the flower is called epigynous flower. 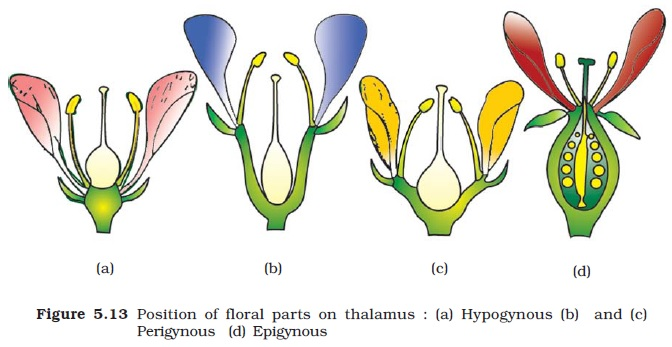 5.7.1 Structure of a Dicotyledonous Seed

5.9 Description of Some Important

You will learn that the flower is a modified shoot, which is meant for sexual reproduction. The flowers are arranged in different types of inflorescences. They exhibit enormous variation in structure, symmetry, the position of ovary in relation to other parts, an arrangement of petals, sepals, ovules, etc.

If you are unable to determine these questions or facing any problem to understand them, then go through the book again and then try to solve all the given questions by yourself and then match it from the class 11 biology NCERT solutions as it will help you to prepare not only for the 12th board exam even also for other competitive exams like NEET.

Question: What are androecium flower given in morphology of flowering plants ncert of biology class 11?

It is the whorl present next to the corolla. The androecium mainly consists of stamens which are the male reproductive unit of a flower. A stamen is composed of two parts i.e. anther and filament.

The anther is the bilobed structure with a stalk called the filament. Inside the anther, pollen grains are formed.

Question: What are the benefits of solution for morphology of flowering plants ncert of Biology Class 11?

Question: What are the important Topics of Solutions for morphology of flowering plants ncert of biology class 11?

Question: What are gynoecium flowers?

The innermost whorl of a flower is called gynoecium. It consists of pistils. A pistil is composed of three parts stigma, style and ovary.

In this pistils are the female reproductive units of a flower.