Nervous and muscular tissues provide control and coordination in animals. Environmental changes are detected by specialised tips (dendrites) of some neurons (present in sense organs i.e., ear, tongue, skin, nose, and eye) by chemical reactions that create electrical impulses. This impulse travels through the cell body to the axon of the neuron. The nerve impulse is transmitted from one neuron to another through a junction called a synapse. Synapses could be electrical synapses or chemical synapses. Neuro-muscular junction formed between neuron and muscle fibre transmit nerve impulses to muscle cells. 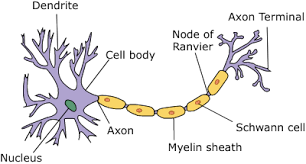 What Happens in Reflex Actions?

Reflex actions refer to sudden involuntary reactions to a stimulus in the environment. No thinking in the brain is involved in reflex actions, instead, this quick response is mediated by the reflex arc in the spinal cord. The spinal cord is a bundle of nerves on its way towards the brain from all across the body. In a reflex arc, a sensory neuron receives a signal from a receptor organ and transmits the impulse via a sensory neuron in the spinal cord, and then to a motor neuron that carries this impulse to the effector organ. It can also be perceived as the quickest/ shortest route for an impulse between a receptor to an effector. 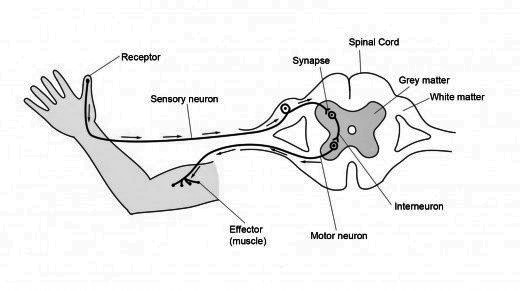 The central nervous system (CNS) is the site for information processing and control, it is constituted by the brain and spinal cord. The brain is the main coordinating centre of the body. The peripheral nervous system (PNS) facilitates communication between the CNS and the rest of the body. Nerves originating from the brain are called cranial nerves, and those from the spinal cord are termed spinal nerves. 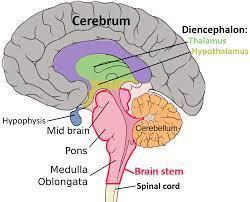 The brain has three broad divisions; forebrain, midbrain, and hindbrain.

The forebrain is the biggest section of the brain, it receives sensory impulses from various receptors, and is titled the main thinking part of the brain. It controls all voluntary actions. The forebrain has specialised areas for various senses and a separate area for interpretation of this sensory information by combining data from other receptors and comparing it with existing information stored from past experiences. The Hypothalamus (part of the forebrain) is associated with various sensations like hunger.

How are These Tissues Protected?

How Does The Nervous Tissue Cause Action?

Unlike animals, plants don’t have nervous tissues for control and coordination. Leaves of Chui-mui/ touch-me-not plant fold when touched; this movement is independent of growth. Growth-dependent movement in plants is seen during seed germination, the roots go down in the soil, and the stem rises in the air.

The plants also use electrical-chemical means to convey information from cell to cell. Folding leaves of touching me not is an immediate response to stimulus (touch/shock), it’s caused by lowering of turgidity in plant cells.

Movement Due to Growth

Environmental stimuli like light, gravity, or water can trigger directional growth towards/against the stimulus. The bending of plant shoot towards light is called phototropism. Plant roots move down the soil in the direction of gravity, this behaviour is termed as positively geotropic growth. Plants also react to water; hydrotropism and chemical stimuli; chemotropism which is seen in pollen tube development in angiosperm ovules.

Electrical impulses deliver the message very quickly as compared to chemically administered signals, but cells have to be in direct contact with neurons to send/receive impulses. Electrical impulse also requires some time to reset before it can transmit the next impulse.

In chemical coordination, cells release the messenger chemical that will reach its target by diffusion. Target cells have special molecules on their plasma membrane to detect the messenger molecule. This method of communication is much slower than electrical transmission, but it can be used steadily and persistently.

Similar to animals, plants also use chemicals to communicate between different parts. Auxins, gibberellins, and cytokinins are plant-growth-promoting hormones. Auxin is synthesized at the shoot apex; it promotes cell elongation. Auxin causes bending of shoot towards the light. Gibberellins help in stem growth. A high concentration of cytokinins is found in areas of active cell division, they promote cell division. Abscisic acid is a plant growth inhibitor hormone, it affects wilting of leaves. 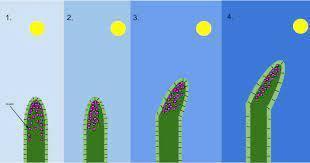 Control and coordination Class 10 notes will be useful in revising the chapter and getting a sense of the key issues discussed. This NCERT Class 10 Science chapter 7 notes may also be used to cover the important concepts of the CBSE Science Syllabus in Class 10 as well as for competitive examinations such as NEET and NTSE.

Question: What’s the structural and functional unit of the nervous system in chapter 7 control and coordination?

Question: In Class 10 chapter 7 ncert what is a reflex arc?

In a reflex arc, a sensory neuron receives a signal from a receptor organ and transmits the impulse via a relay neuron in the spinal cord to a motor neuron that carries this impulse to the effector organ. It can also be perceived as the quickest/ shortest route for an impulse between a receptor to an effector.

Question: What is a synapse in Class 10 chapter 7 ncert notes and class 10 control and coordination notes?

The nerve impulse is transmitted from one neuron to another through a junction called a synapse. Synapses could be electrical synapses or chemical synapses.

Question: What are the advantages of chemical coordination over electrical signalling as mentioned in Class 10 Science chapter 7 notes pdf download?

In chemical coordination, cells release the messenger chemical that will reach its target by diffusion. Target cells have special molecules on their plasma membrane to detect the messenger molecule. This method of communication is much slower than electrical transmission, but it can be used steadily and persistently.