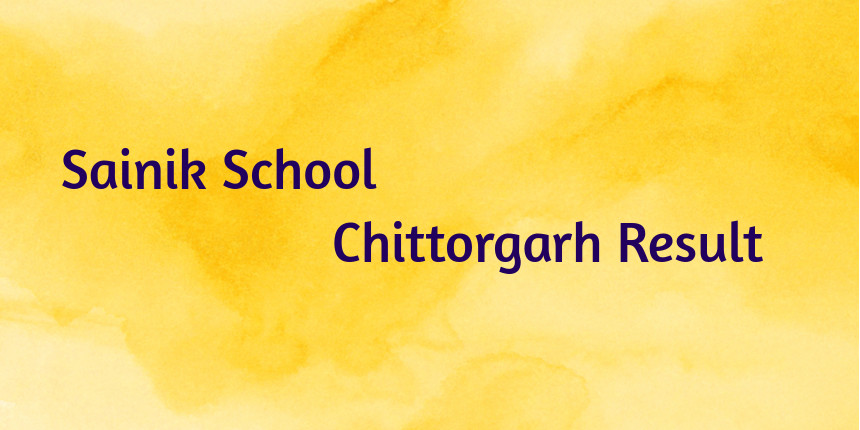 Applicants are advised to go through the table to not miss any important upcoming event of Chittorgarh Sainik School result.

Go through these pointers to view the Sainik School result 2020 without any difficulty.

The details given below are included in Sainik School result.

Students must note that there are several health necessities that should meet Sainik School’s curriculum in order to get shortlisted in the same. After the declaration of Sainik School Chittorgarh result 2020, selected students will be called for the medical examination. Applicants will be later called by the exam conducting authority for the verification of the documents.

Applicants must go through several health criteria put forth by Sainik School. The medical examination is the second round of Sainik School Chittorgarh admission. After the selection in the first round written exam, students are called for the medical test. Read the points mentioned below to know the health criteria as per Sainik SChool curriculum.

The essential documents mentioned below must be carried by the applicants on the time of admission.

The exam conducting body have several rules and regulations in case of a tie in the marks of two students. Find below some of the tie-breaking criteria followed by Sainik School Authority:

Cutoff marks are the minimum qualifying marks to crack the entrance exam. The cutoff is usually released with the declaration of Chittorgarh Sainik School result 2020.

Question: When will the Sainik School result be declared?

Question: Where can I check my Sainik School result?

You can check Sainik School result on the official website sainikschooladmission.in.

Question: Is there any negative marking in Sainik School entrance examination?

No, there is no such provision of negative marking in the examination.

Question: What will be the difficulty level of questions asked in the exam?

Questions will be of a moderate level.

the face value of each share is rupees 10 if dividend is 16% then what will be the income from 600 shares?

Here is how to calculate-

why our earth is not plane e=mc2

Because E=Mc^2 is theory of relativity.

The E stands for energy , the m for mass, and the c for the speed of light (approximately 300,000 kilometers per second).

It means  that there is a sense in which mass and energy are the same thing. There are ways to convert from one to the other, and vice-versa. It also means that the amount of energy in even a very small amount of mass is enormous.

And for the question why our earth is not plane

If you want a theoretical answer then there are various answers like :

If you want any further elaboration of the answers please mention in comment section.

Kindly elaborate what you are asking for so that we can further assist you.

sir, My son has qualified external exam this years by 192 marks but still I am not getting any medical information. so please sir give me son hints..

There is an official notification that says that Medical Exam will be conducted between February 20th to March 10th. You can check that at: https://www.sainikschooladmission.in/upload/pdf/AISSEE-2020-21.pdf , If your son hasn't been called for a medical test, you may have to reach out to the helpdesk at: 7827969316, 7827969318 or their email id: sainikschooladmission@gmail.com

when will release the results of entrance exam 2020

The results for Sainik School admissions has been released on 31st January 2020, followed by release of OMR sheet. For more information you can refer this link: https://school.careers360.com/articles/sainik-school-result

View All Questions
Have a question related to Sainik School Admission ?

Your Sainik School Admission brochure has been successfully mailed to your registered email id .