KVPY 2018 Topper Interview: Careers360 interacted with Kartikey Gupta, KVPY 2018 topper with AIR 6 to know about his KVPY journey making his parents proud. He really deserves a pat. In an interview with KVPY topper Kartikey Gupta, we come to know that NCERT syllabus plays a key role in the preparation of KVPY exam. Kartikey secured 93.75 marks in the stage 1 theory exam and 76 marks in stage 2 i.e. interview under SX category. A firm determination in the right direction and proper guidance by his parents and teachers helped Kartikey to climb the ladder of success. Here, he talks to Careers360 about his success mantras, preparation strategy, and resources that he used during his preparation. 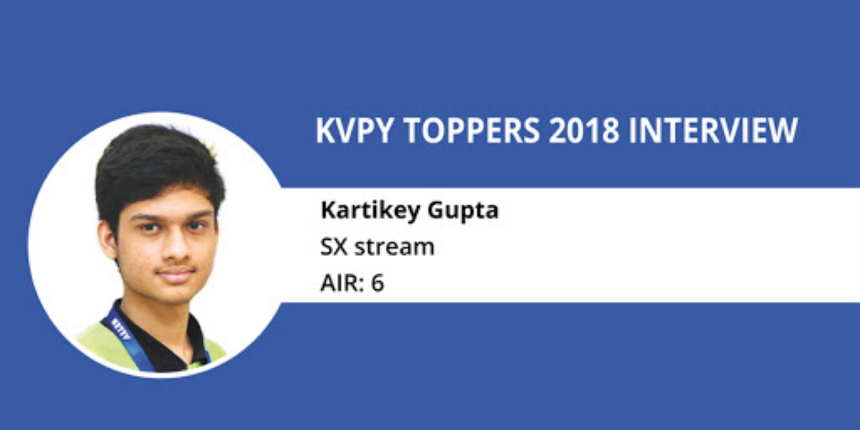 Careers360: Tell us something about yourself.

Kartikey Gupta: I am from Maharashtra. I was preparing for JEE from Allen Mumbai along with KVPY. I appeared for KVPY in both class 11th and 12th and managed to clear both the times. In SA stream I had AIR 129 and in SX stream my rank was AIR 6. respectively.

Careers360: Congratulations on your KVPY 2018 result. How do you feel?

Kartikey Gupta: I am feeling great as KVPY was challenging exam but I managed to clear it with good scores

Careers360: Are you a PCM student? If yes, how did you prepare for Biology?

Kartikey Gupta: Yes, I am a PCM student. In KVPY SX, there is an option to choose maths or biology. But in SA stream, Biology syllabus is from class 10th, so not much efforts are required.

Careers360: How did you come to know about KVPY? What made you apply for it?

Kartikey Gupta: I came to know about KVPY through Allen Career Institute. Teachers at Allen encouraged me to take part in KVPY.

Careers360: When did you start your KVPY preparation?

Kartikey Gupta: I started my preparation in class 11th. I had joined Allen Career Institute, Mumbai for JEE exam preparation so along with that I prepared for KVPY. It was easy to prepare for KVPY as the syllabus for both exams is almost the same.

Careers360: Which books you preferred to prepare for KVPY and which is your favorite subject?

Kartikey Gupta: I used the study material provided by my coaching classes (Allen Institute). Along with that, I referred a few standard textbooks like HC Verma for Physics and NCERT books for Chemistry. My favorite subject is Maths.

Careers360: Mock tests and sample papers – how extensively did you practice with the help of these? Do you think to practice from the KVPY question papers help and how?

Kartikey Gupta: I practiced the question papers of the past 3-4 years for practice. They helped me a lot as I got to know the level of the questions and time required for each subject.

Careers360: What was your exam day strategy? How did you prepare for it on a daily basis?

Kartikey Gupta: I started writing without reading the question paper and without getting stressed. I decided to attempt section 1 first then section 2. I attempted PCM in section 1 and CM in the second section. I attempted Chemistry first as it takes less time then I attempted PM.

Careers360: How much time did you devote to self-study vs. coaching?

Kartikey Gupta: I use to attend 5 hours of coaching classes daily. A total of 6-7 hours per day I use to devote to self-study.

Careers360: Give us your views on the interview process. How many members were there in the panel? What kind of questions did they ask you?

Kartikey Gupta: Around 7-8 teachers were there in the panel. They asked the questions related to the answers which I had written in a self -appraisal form. More conceptual questions were asked. The questions of Organic Chemistry were a bit tough. In Mathematics question from the topics which were neither part of JEE syllabus nor part of NCERT but were in Olympiad( like Number theory, the principle of Mathematical Induction, the Modulation index) were asked.

Kartikey Gupta: For KVPY conceptual clarity is required. The candidates preparing for JEE and Medical exam can easily qualify KVPY exam. I would suggest future aspirants prepare for the topics mentioned above along with NCERT syllabus.

what is the advantages of kvpy exam?

The Kishore Vaigyanik Protsahan Yojana (KVPY) is a scholarship funded by the Department of Science and Technology of the Government of India. This programme was started in 1999 and since then has been administered by the Indian Institute of Science (IISC). The aim of this programme is to motivate exceptionally talented students to pursue a career in science, engineering and research domain. A special committee is set up by IISC to screen the applications. The screened applicants are then called for an aptitude test and interview. Candidates with a well-combined score are considered eligible for the scholarship.

Clearing the KVPY examination is not an easy feat and requires a rigorous amount of hard work and proper training. Plancess has been providing guidance to aspirants for KVPY scholarship for a long time. Qualifying for this scholarship is an achievement in itself. There are several other benefits which are discussed below.

The scholarship money provided to students under this scheme is really good. For the first three years, a basic scholarship of Rs. 5000 per month is provided to students from both science and medicine faculty. For every subsequent year, the sum is increased to Rs. 7000 per month. Besides, there is an annual contingency grant of Rs. 20,000 for the first three years and of Rs. 28,000 for every subsequent year too. The monetary aid provided by KVPY is really helpful for students from the lower middle-class section of the society.

ADDS WEIGHT TO YOUR CV

All the hard work put in securing a KVPY scholarship starts bearing the fruit during the professional life of a candidate. A KVPY scholarship gives any candidate a competitive edge over his competitors. It increases his chances of getting an admission or job in a foreign location.

The KVPY platform is a great place to network and make new friends with similar aspirations and dreams. Many online education delivery platforms like Plancess provides quality video lectures and study material for medical and engineering students, who aspire to secure a KVPY scholarship. Candidates can exchange ideas and build long lasting bonds that can inspire them to achieve their goals in the long run.

EASIER TO GET AN ADMISSION IN IISC

Since the KVPY programme is conducted under the administration of IISC, clearing it, places a student in the favourable books of the IISC faculty. IISC is generally known for its high cut off marks. However, if you are a KVPY scholarship holder, chances are high that you can get an easy admission in the undergraduate courses of IISc.

Every student who qualifies for KVPY is required to do a research project every year under the guidance of a scientist or scholar. Being a part of such projects enhances his knowledge and motivates him to think independently, which is essential for a successful and flourishing career in science and engineering.

Last but not the least, the Vijyoshi Camp is held particularly for KVPY students where they can meet great scholars, researchers and scientists from their respective field and interact with them. It is indeed a great opportunity which is only reserved for KVPY scholarship holders.

Considering the benefits of a KVPY scholarship programme students generally start preparing for this exam right after class X board exams. Multiple attempts can be made for securing the KVPY scholarship and given the prestige it carries, all the efforts are worth the pain.

Go on the kvpy official website. In the login window, click on 'Sign in'. After you click on the next button, an option will pop out asking you for the language you need. You can choose Hindi there since the exam is available in both the languages Hindi and English.

Refer to the site below for more detailed information to give the mock tests..

please briefly tell about KVPY exam and its benefits?

KVPY stands for Kishore vaigyanik Protsahan yojana. It is conducted every year by Indian institue of science (IISC).

It is a national level exam and it is aimed to conduct education in science and research for students. The exam offers scholarship to students. There are two phases of exam one is aptitude exam and then is the interview.

Check out this link for more information

Thank you and all the best.

Im studying in 12 th standard can i write kvpy ... Im a physical education student!? without maths

Since you are in 12th...you belong to SX category

Here are the Eligibility details for SX paper

You can write the KVPY exam but your criteria does not fit into the eligibility criteria for KVPY .So dont waste your efforts by giving this exam

sir I have failed in 2 subjects in 12th standard. I will give the exam this 2 subjects in 2021.if my persanteg 65 up above then I am able to kvpy exam in 2021 ? and can important 10th percentage for kvpy exam?

KVPY(Kishore Vaigyanik Protsahan Yojana ) it is a scholar ship program by the government of india.

the eligibility critreria for the exam for KVPY in the SA,SX, stream must have science subjects in the class higher class

->Candidates can apply for SA stream if they have enrolled to Class XI with science subjects.

-> candidates who have appeared for Class XII with Science, subjects can apply under SX stream .

After you're passing the subjects in 2021. you can apply for the kvpy exam. If you under general category and OBC you must maintain 75% or above. if you are under SC/ST/pwd 65% or above is the minimum eligibility criteria.

Answer later
Report
View All Questions
Have a question related to KVPY ? Ask