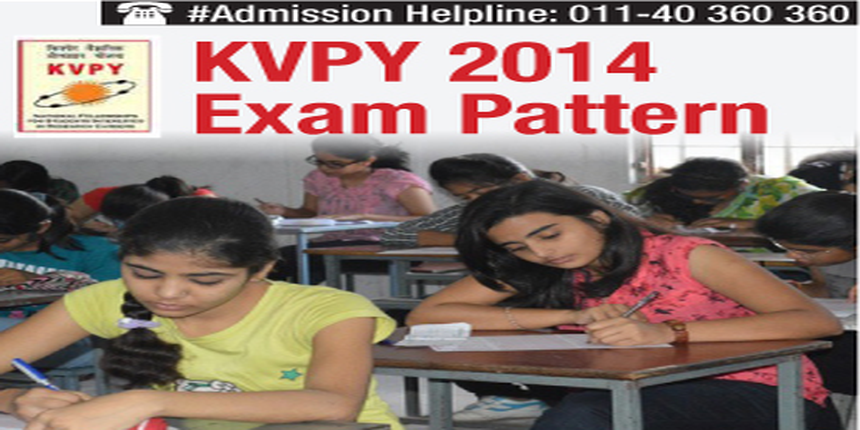 KVPY 2014 Exam Pattern - According to KVPY 2014 Exam Pattern, KVPY Aptitude Test consists of 80 questions for SA stream and 120 questions for SB/SX stream, to be answered by the students. The Aptitude test can be taken in paper-pen format or computer-based pattern in any of the two languages- English and Hindi. KVPY 2014 Aptitude Test will be held on Nov 2, 2014.
LATEST - KVPY 2017 Dates announced, IISc to conduct KVPY on October 29, 2017

The Students are shortlisted and called for the KVPY written aptitude test after their scrutinizing as per the eligibility criteria. This written test is conducted at different centre across the country to select students for KVPY fellowship/scholarship.

The KVPY 2014 aptitude test can be in paper-pen pattern in various cities of India. However, KVPY aptitude test 2014 in computer-based format will be held in the following cities- Bangalore, Chennai, Delhi, Hyderabad, Jaipur, Kochi, Kolkata, Mumbai, Pune.

The aptitude test does not follow any prescribed syllabus, but students are tested as per the syllabus of class X/XII/First year of B.Sc./B.S./B.Stat./B.Math./Int, M.Sc./M.S as applicable. Eligible students are evaluated on the basis of their analytical ability compared to his/her factual knowledge.

KVPY 2014 Selection Procedure is a two-stage process, which includes Aptitude Test and Interview. After the test, shortlisted students are called for the interview round and on the basis of their performance the list of final selected students or awardees is declared by the KVPY.

Stay tuned to careers360.com for more news and updates on KVPY Fellowship/Scholarship

KVPY Books 2020- Know which are the best books for KVPY 2020 Preparation and their authors. Check...

if my subject is PCM then I apply for kvpy exam. and what is SA, SX

Hello.
Kishore vaigyanik protsahan yojana exam (KVPY), is formerly  scholarship exam along with it is also an entrance exam. If you are in class 11th then you will give KVPY SA set of exam and if you are in class 12 then it would be SX stream , yes you can also give if you  are a PCM student, but in general for PCM student exam becomes much difficult because there will be question asked on physics ,chemistry, Mathematics and biology too, for the reason it is much advantages for pcmb students.
Best of luck.
Read More
Answer
Answer Later
Report
3 Views

can give kvpy in class 12 ? there is any role of class xi perentage?

see you can appear in kvpy exam in 12th class, when you are in final year  of 10+2 course. there is no need to mention your 11 th percentage, but question will come from 11th and 12th syllabus both. so you need to study strictly for both of the exam.

follow the previous years question, and if you are preparing for jee main exam or neet exam, it is an added advantage for you.

all the best for your future.

The kvpy exam is held for different class group of students. 11 appearing students come under the stream SA. The eligibility for Student coming under S.A stream to apply for KVPY exam is as

eligibility  criteria - Students enrolled in XI Standard (Science Subjects) during the academic year 2019-20 and having secured a minimum of 75% (65% for SC/ST/PWD) marks in aggregate in MATHEMATICS and SCIENCE subjects in the X Standard Board examination immediately in the preceding academic year are eligible to appear for Aptitude test.

So according to above mentioned criteria you can give KVPY exam.

Hope you find this helpful. Best of luck.

can anyone send the link to check kvpy 2019 result

The apptitude test was conducted in the month of November 2019 and the results is announced recently.

Hope this will help you.

Hello.
Before taking any preparation plan firstly I will suggest you to analyse the complete syllabus of KVPY and go through the expert advice and preparation tips of KVPY exam you can have it from the below link:
https://school.careers360.com/articles/how-to-prepare-for-kvpy
Now there are various coaching institute which offer online preparation program for KVPY exam so you can go through them.
Best of luck.
Read More
Answer
Answer Later
Report