Classrooms at Oberoi International School, Mumbai, are collaborative experiments in the school’s philosophy of learning. They believe in learning beyond classrooms. Read more about the coveted school below.

“Hey guys! Are you happy?” shouts Neil McWilliam to a group of nursery kids and their teacher preparing to go home at the end of the school day. McWilliam, the Head of Oberoi International School in Goregaon East of Mumbai, considers happiness as the index for a day’s work. “We have a reputation of being a happy school,” he says underlining the philosophy of learning at the institution which has become an important feature in Mumbai’s educational landscape. 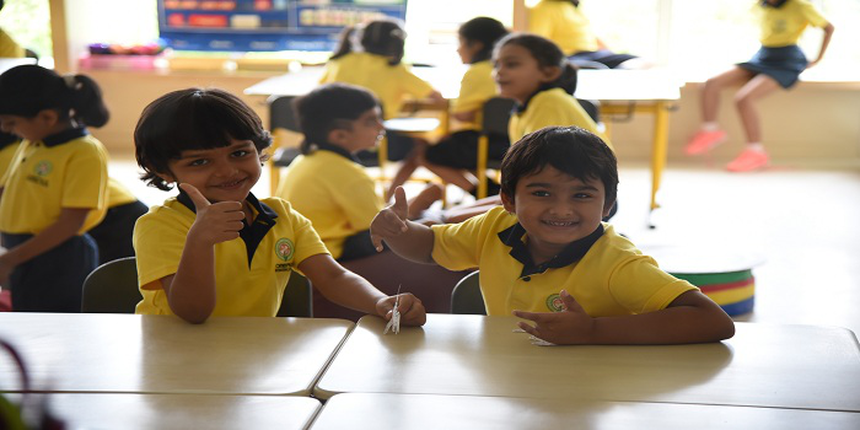 There are several reasons for the happiness of the school, which runs the International Baccalaureate (IB) programme. For one, the school considers its classrooms collaborative experiments. The focus is on growing education beyond classrooms. The school believes that kids learn best when what they learn answers their question. Particularly, when they themselves have asked the questions. The school relies on global research that shows that students learn far more efficiently from each other than from the teacher if they are working together in a collaborative environment.

The students have a greater role at the Oberoi International School. McWilliam remembers a meeting with a group of students. “Some kids came to me a couple of years ago saying the school is too noisy. So I put together a team of sound monitors, all children, to measure sound levels at different parts of the school, different times over a one-month period,” he says. The entire data was collated, analysed and a conclusion was drawn form it. The students then presented their conclusions to the school board.

Yet another reason for the school’s happiness is the selection process which focuses on the families of students and not the students who apply for admission. The school’s thinking is that it serves best to those families who understand what the school does, why it is different, and embrace what it has to offer. “We want families to understand what we offer and that is equivalent to what they want for their children and what they think their children would need in the future,” says McWilliam. “The way we educate our students is very different from when their parents were educated. If we want them to be involved in the learning process, then we have to teach the parents what we do and who we are,” he added.

The process of preparing the children to become global citizens is an ongoing process at the school which takes help of the curriculum and the content. These are related to the contemporary topics. This year, the school introduced Global Politics for IB Diploma to help  students come to an understanding of the present society. “I can’t think of a better time in history for introducing students to a course on global politics. It is interesting for the students to be able to see India in a global context.” says McWilliam.

Last year, the IB Asia-Pacific region decided to enter into a close relationship with a flagship school in each of their major countries. In India, the Oberoi International School was chosen from over 150 IB schools as the flagship school in the country. It was a decision, which the school sees as an advantage because it has made the school a hub for IB professional development in India. Last November, the school hosted 400 IB teachers from all over the country, who came to the school for their official IB training. “This November, it is going to be 600 IB teachers,” says McWilliam.

Mc William believes that hiring good teachers is the most important part of his job. “We talk about the facility and how wonderful it is. But at the end of the day it does not matter how many computers you have, if you don’t have good teachers,” says McWilliam. The school, which has about 20 percent expatriate teachers and 80 per cent global teachers, hires internationally and locally. Training of teachers is at the core of the school’s functioning. “Ninety percent of what we know about how kids learn, we discovered in the past two years, so training is very important,” says McWilliam.

This year, 63 IBDP students of the school received acceptances from 124 universities from 10 countries, with a combined scholarship offer of 1.5 million dollars. The placements were preceded by 27 workshops and after-school sessions attended by students, parents and university representatives. The school counselling team organised visits by 162 foreign universities and 20 Indian universities. To complement, last year’s graduating students returned to the school to talk about their experiences at the Indian universities. The collaborative experiment at the school has also been extended even to the efforts to find a new name for the school’s cafe. One student has proposed an
interesting name - Deja Bru.