What is the difference between conduction, convection, and radiation - The matter is differentiated into three states known as solid, liquid, and gas. One matter can be converted into another matter. During this state change, heat transfer occurs between the system and the surroundings. Heat transfer is a physical act or the process of thermal energy between two different systems or two different objects of the same system by the method of heat dissipation. 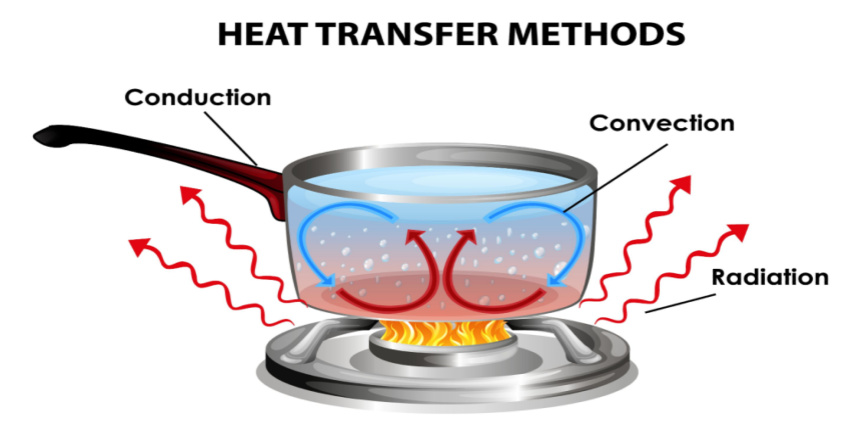 Difference Between Conduction Convection and Radiation:

Interested students can also check the following links. here they can find NCERT solutions for all class.

Do you know how heat transfers from one object to another object? There are mainly three different modes of heat transfer which are listed below.

The heat transfer in any solid body (without any radiation flow) occurs due to collision between the higher energy molecules with lower energy molecules is known as conduction. The collision occurs due to the free electrons in the solids. This process occurs along with the high vibration of solids. Heat cannot be transferred from a low-temperature object to a high-temperature object unless it is subjected to external forces. The objects or substance which allows the heat to pass through is known as conductors. Example: Metals are good conductors and heat conduction is easily found in metals. similar to flow electricity, ability of material to transfer heat is know as thermal conductivity.

The elastic bonding between the dielectric solids, the molecular movement occurs like waves. These waves are similar to echo waves. But compared to echo waves, they have very high frequencies and are also quantized like phonons. Phonons relay high energy from hotter sections to cooler sections. The conduction of heat takes the phonons as gas molecules that travel inside a solid which have material irregularities. The heat conduction of nonmetallic liquids is intermediate lies between solids and gases.

The heat transfer that occurs in fluid due to the movement of the molecules in the fluid is known as convection. The process occurs both naturally and artificially. Gravity and buoyancy play an important role in this process. The hot object moves upward and the cold object sinks. for example example Air heating systems. this movement of fluid due to temperature difference knw as convection current. There are two types of convection namely Natural / free convection and Forced convection.

When the relative motion occurs between a hot object and the fluid, some external agent is required to maintain the convection, it is called forced convection.

Also, there are some important related topics. interested students can read to know more about the topics.

Heat transfer is which the heat can be transferred in the form of electromagnetic waves. This process does not require any medium for energy transfer. There is no requirement for any direct contact or molecule movement for this process. It occurs without touching the object. Radiation depends on some kind of surface properties like color, the orientation of the surface, and so on. The energy carried out by the EM waves is known as radiant energy. This energy can travel through a vacuum from the source to its surroundings. Example: The heat from the sun that reaches earth takes the form of EM waves and this is one of the radiation waves. 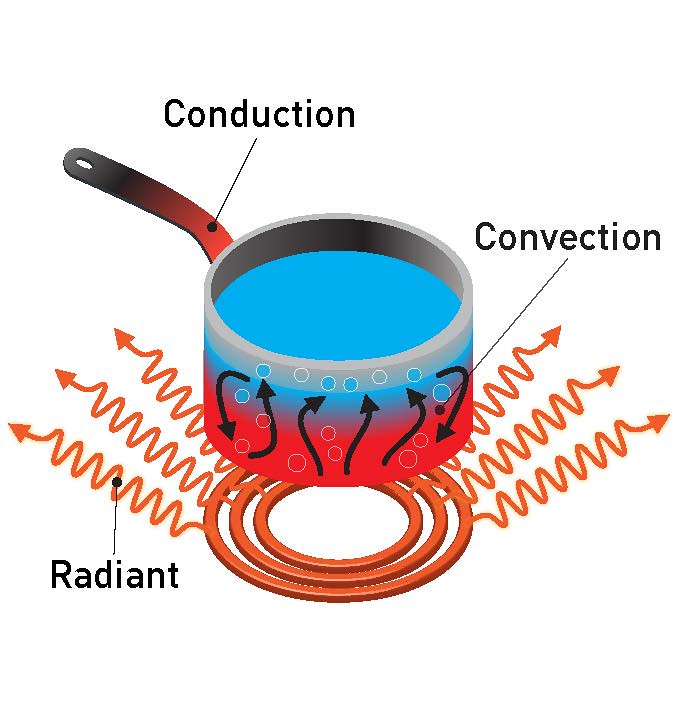 From this article, We saw the heat transfer in detail, and also saw the difference among conduction, convection, and radiation. Now, let us see some of the frequently asked questions from class 10, class 11, and class 12.

Question: What is an example of convection?

Convection is a mode of heat transfer in fluids. in water heat flow through the convection.

Question: What are properties of heat?

Question: What type of heat is radiation?

Thermal radiations are referred to as radiant heat. Thermal radiation is generated by the emission of electromagnetic waves. These waves carry away the energy from the emitting body. Radiation takes place through a vacuum or transparent medium which can be either solid or liquid

Question: Distinguish between conduction and convection

The heat transfer that occurs in fluid due to the movement of the molecules in the fluid is known as convection. The hot object moves upward and the cold object sinks.  Example: Air heating systems.

Question: Explain the types of heat transfer and also discuss the difference between conduction, convection and radiation

Question: What are the 3 types of heat transfer?

Question: What is conduction, convection, and radiation?

Your difference between conduction convection and radiation brochure has been successfully mailed to your registered email id .