Scientists employ a variety of techniques to examine the world around them. They make observations and collect data using their senses. Some observations are as easy as determining an object's texture and color. Scientists may need to conduct measurements if they wish to learn more about a chemical. One of the most crucial components of science is measurement. Without the ability to quantify, conducting tests and formulating ideas is difficult.

The formula for constructing a Wheatstone bridge is as follows:

S is the bridge's standard arm.

P and Q are the bridge arm ratios.

The Wheatstone bridge circuit is seen in the diagram above. R1, R2, R3, and Rx are four resistors placed in a quadrilateral ABCD pattern. Through the key K1, the points A and B are connected to a battery E. 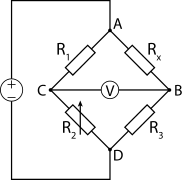 Through the key K2, the points B and D are connected to a galvanometer G.

The resistances are chosen in such a way that the galvanometer needle does not deflect and the current IG. flowing through it is zero. This is referred to as the bridge's null condition or balanced condition. R1/R2 Equals R/S in this situation.

Instead of S, an unknown resistor is attached, and the resistor R can be changed. The ratio arms are sometimes referred to as the resistors R1 and R2. The R1/R2 ratio is kept constant, and R is set to a value that meets the null condition. The unknown resistance comes from,

Question: What is the Wheatstone bridge principle, and how does it work?

The Wheatstone bridge operates on the null deflection principle, which states that their resistance ratios are equivalent and that no current flows across the circuit.

Question: When do you think the Wheatstone bridge will be balanced?

When no current passes through the galvanometer, the Wheatstone bridge is considered to be balanced. By modifying the known and variable resistances, this condition can be attained.

Question: When is it reported that the Wheatstone bridge is unbalanced?

The bridge is unbalanced under normal conditions, with current flowing via the galvanometer.

Question: What are Wheatstone bridge's limitations?

The resistance of the leads and connections becomes significant when measuring low resistance, introducing an inaccuracy.

Get answers from students and experts Ask
Wheatstone Bridge

Your Wheatstone Bridge brochure has been successfully mailed to your registered email id .

Help us to help you.

By Signing Up, you agree to our Terms & Conditions