“If You Are Working On Something That You Really Care About, You Don’t Have To Be Pushed. The Vision Pulls You.” – Steve Jobs

Then in 1972, Moseley proposed the Modern periodic law, which says “the physical and chemical properties of the elements are periodic functions of their atomic numbers”. Then finally, came the "Long-form" of the periodic table. This was based on Bohr-Bury concept of electronic configuration. This table has 7 periods and 18 groups. The elements existed in the table can be classified on the basis of their electronic configuration such as s-block, p-block, d-block, and f-block elements. Hydrogen with one electron occupies a special position in the periodic table. 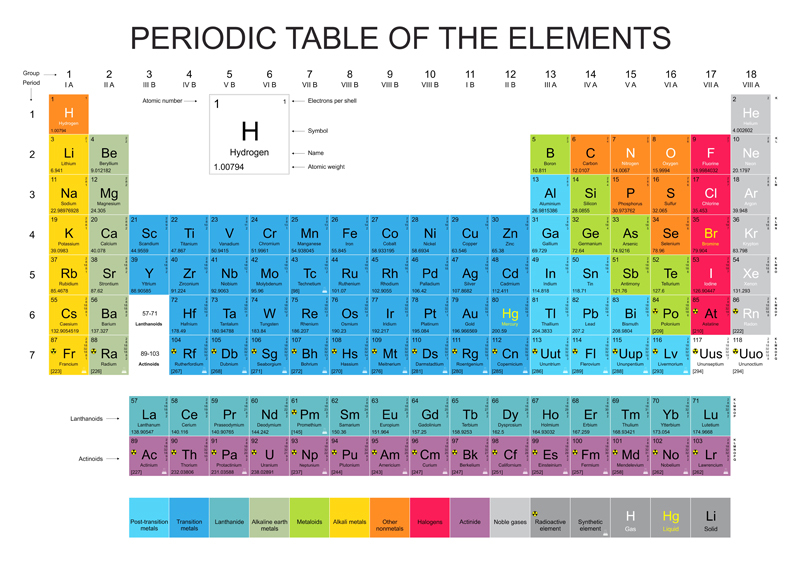 As of 2001, there are 112 elements available to us so far. Out of which, 88 elements are found on earth naturally and rest others are synthesized in the laboratory. Most of the elements in the periodic table are metals. These metals exist at the left side of the periodic table. Some of the elements in the table are non-metals and they are less than 20 in number and they exist on the right side of the table. Some of the elements that exist on the border of the metals and non-metals are known as metalloids. Their properties are similar to those of metals as well as to non-metals. Most of these elements are solids, out of them only 11 elements i.e, noble gases, oxygen, nitrogen, fluorine, chlorine, hydrogen exist as gases and two of them are liquids i.e, mercury and bromine. Among all these elements, carbon, oxygen, and hydrogen are the three most important elements for the human body. Carbon consists of 18% in the human body, oxygen is 65% and hydrogen is 10% by mass.

Notes for Classification of Elements and Periodic Table

In this section, you will study about the important topics of the chapter, overview, formulae and some important tips and guidelines for the preparation.

(i) Atomic Radii, and its trend in periods and groups

Overview of the Chapter

In this chapter, there are various important topics that you must understand completely:

Electronic configurations and types of elements

Based on the filling of electrons in the respective orbitals, elements are classified as s, p, d and f block elements.

The elements of the periodic table show trends in various properties. These properties are mentioned below:

Table 1: Atomic radii (in pm) across the periods and groups

Table 3: Electronegativity values according to the Pauling scale across the second and third period

Most of the chemical properties of the elements will be discussed in the later chapters, here we are focusing only on two important properties i.e, periodicity of valence state and anomalous properties of second-period elements.

How to prepare for the Periodic table and its elements?

For this chapter, first, you need to finish the theory thoroughly from the NCERT book and then simultaneously solve the examples and questions given in the book. Apart from this, if you want to prepare for the advanced level for competitive exams like JEE and NEET, you must read the book - O.P. Tandon. Meanwhile, in the preparation, you must continuously give the mock tests for better understanding. Our platform "entrance360" will help you with the variety of questions for deeper knowledge and it will also provide you with concept videos, articles and mock tests for better understanding.

Classification of Elements and Periodicity in Properties Updates and Articles

Periodic Trends in Ionic Radii in Modern Periodic Table - Get ...

Your Classification of Elements and Periodicity in Properties brochure has been successfully mailed to your registered email id .