Elastic constants are the values that determine the amount of deformation caused by a certain stress system acting on a material. Elastic constants come in a variety of forms, including:
Bulk modulus is a term that refers to the amount of (K)
Young’s modulus or elastic modulus, often known as the modulus of elasticity, is a measure of the elasticity of a material (E)
The Poisson Ratio (µ)
Modulus of stiffness or shear modulus (G)

Young’s modulus is a mechanical property of linear elastic solids such as rods, wires, and other similar objects. Other quantities, such as Bulk modulus and shear modulus, can be used to determine a material's elastic properties, but Young’s modulus is the most widely utilised. When a specific load is applied to a solid object, it deforms. When the pressure is removed from an elastic object, the body returns to its previous shape. Beyond a small degree of distortion, many materials are not linear and elastic. Only linear elastic materials have a constant Young’s modulus.

From Other Quantities: E=Modulus Young's Formula 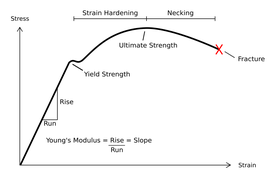 The ratio of stress and strain, which corresponds to the material's stress, determines the Young’s modulus of such a material. The relationship is seen in the table below.

E =, where E is the material's Youngs formula in N/m2, is the stress applied to the material, and is the strain corresponding to the applied stress in the material. With the value of Young’s modulus for a material, the rigidity of a body may be determined. This is because it reveals the body's ability to resist deformation when force is applied.

We can assert that steel is more robust in nature than wood or polystyrene by studying its modulus of elasticity units, since it has a lower tendency to deform under applied load. Young’s modulus is also used to calculate how much a material will deform when subjected to a given load.

Another thing to remember is that the lower the Young’s modulus of a material, the greater the deformation experienced by the body, and in the case of clay and wood, this distortion might vary within a single sample. One part of the clay sample deforms more than the other, whereas a steel bar deforms evenly all the way around.

Question: Determine the Young’s modulus of a material with an elastic stress of 4 N/m^2 and a strain of 0.15.

Question: Give examples of dimensionless quantities.

Question: What exactly is ductility?

Ductility is the property of a material that allows it to be pulled to a smaller portion when tensile stress is applied.

Question: What is dimension of young modulus?

[ML^-1T^-2] is the dimensional formula for Young’s modulus.

The Young’s modulus of a substance is an unchangeable fundamental feature of all materials. Temperature and pressure, however, play a role. The Young’s modulus (or Elastic Modulus) is a measure of a material's stiffness. To put it another way, it refers to how easily it may be bent or stretched.

Question: What is the significance of elastic modulus?

A material's Young’s modulus is a useful property to know in order to forecast how it will behave when subjected to a force. This is critical for practically everything in our environment, including buildings, bridges, automobiles, and more.

Your Youngs Modulus Elastic Modulus brochure has been successfully mailed to your registered email id .

Help us to help you.

By Signing Up, you agree to our Terms & Conditions