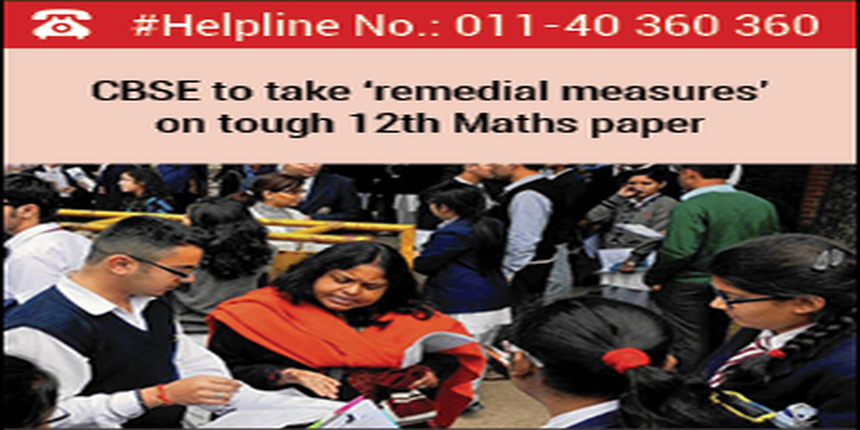 After uproar over 12th Board Mathematics paper being tough and questions being allegedly leaked on social media prior to the conduct of the exam on March 14, the Central Board of Secondary Education (CBSE) has agreed to consult subject matter experts and take remedial action before the evaluation process.

Taking into consideration the growing concerns, the CBSE said in a statement, “feedback received from various stakeholders including students, subject teachers, examiners will be placed before the committee of subject experts and the board will take remedial measures before evaluation.”

The statement from the Board came out only after Members of Parliament from several parties raised the issue in the Lok Sabha on March 16, demanding a discussion.

Citing the media reports, Congress leader KC Venugopal and RSP member NK Premchandran referred most of the questions as “very difficult” and also “out of syllabus”.

Referring to the feedback from students, the Parliamentary Affairs Minister Venkaiah Naidu expressed concerns over the high difficulty level of Mathematics paper and assured to request for the Education Minister Smriti Irani's intervention into the issue.

"Certain questions were very tough and even bright students couldn't answer them effectively," Naidu said in the Lok Sabha.

Hours later, the Human Resources Development Ministry clarified that it had already examined the reports of the paper being leaked to students in a few States, including Jharkhand's cities of Ranchi and Dhanbad, and found the allegations false.

After that, CBSE released its statement of “remedial measures before evaluation” on its official website.

Earlier on March 14, CBSE 12th Board Mathematics examination was held across centres in India. Coming out of the centres, most of the examinees were seen upset over the “tough and lengthy” paper. In a few media reports, the allegations of being availability of the paper to students in advance in some cities also surfaced.

Hundreds of worried 12th level students and their parents filed their petitions on change.org and pleaded the Board for lenient evaluation system for Mathematics paper. The petitions got support from all the sides, with the number of supporters growing to thousands in hours.

Students also marked their complaints about lengthy and tough Maths paper on the CBSE website and tagged their concerns in tweets to Union HRD Minister Smriti Irani.

Last year, in a similar incident of complaints, the CBSE had to review the Mathematics paper and give relaxation during evaluation of the paper.

Approximately 10.5 lakh students are appearing in CBSE 12th level Board examination this year all over the country. In 2015, the pass percentage of 12th standard appearing students was around 82%.

Expert Tips for 12th CBSE Board Exam for PCM

i completed my schooling from mp , but i dont have domicile....my parents are from bihar....what would be my home state then? and what should i do?


If you have completed you schooling and have done your 10th and 12th from a school in Madhyapradesh then you can easily get a domicile of MP.Simoly apply online with affidavit at loksevadatia@gmail.com or visit the Lokseva Kendra.

If im not wrong you are talking about VGN Chinmaya Vidyalaya School, Avadi which is situated in tamil nadu> this is a private unaided school affiated to cbse and co-ed.

The classes are from LKG(LOWER KINDERGARTEN) to class 10th.

you can refer this link https://school.careers360.com/schools/vgn-chinmaya-vidyalaya-avadi

which is the best reference book for class 12 cbse students as objective and boards.

HC Verma and Xam Idea. H C Verma is a must-have and the go-to book for Class 12 Physics. Apart from it, S L Arora, Pradeep’s and Xam Idea are other great options. W

Pradeep’s Chemistry. Pradeep’s Chemistry is really helpful. You can also use OP Tandon as a good and dependable reference. However, do not neglect your NCERT book. Refer to these other books only when you have finished revising the NCERT book thoroughly.

RS Aggarwal & M L Khanna. For commerce students, Part 1 and 2 by R D Sharma has a great collection of problems. You could also refer to U-Like papers as Mathematics is one of the most scoring subjects and you certainly don’t want to miss that opportunity.

TO GET ADMISSION IN NIT COLLEGES YOU HAVE TO QUALIFY JEE MAIN EXAM WITH A GOOD RANK/PERCENTILE. TO GIVE JEE MAIN EXAM ELLIGIBLITY YOU MUST HAVE 75% MARKS IN 12TH CLASS WITH PCM.

how to prepare myself for humanities 12 th board papers.

First of all you should collect all the materials which you need for your preparations.This should include texts which you are planning to refer,notes and most importantly previous year question papers with answers.

Secondly make timetable so that you can complete the portions within the time provided. Just roughly refer the previous year question papers so as to get an idea about the pattern of questions .

Now it's time to study. You should understand each and every topic and also maintain your own views about  the same.

It is subject in which the examiner evaluates you on length but you should have a very good time management. Also keep in mind that examiner is not going to read all your answers.Underline important points,make flow charts etc.

View All Questions
Have a question related to CBSE Class 12th ?