Where East meets West- A look at IB Schools 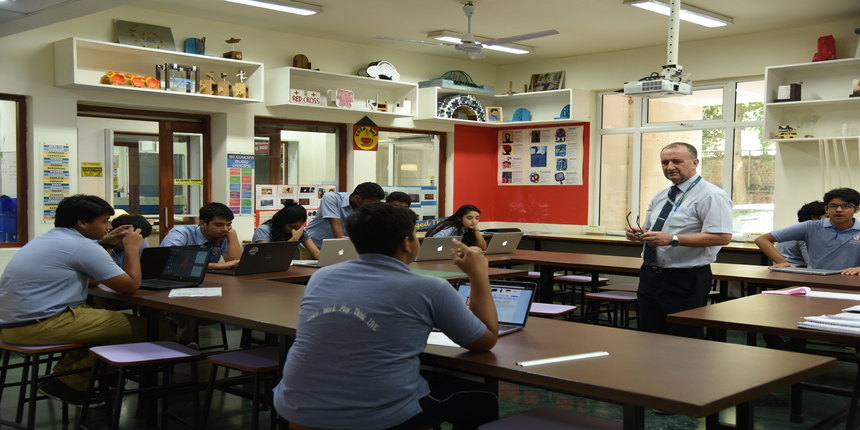 Entering the sprawling campus of Pathways School with its pristine cream-and-white architecture, wide green spaces, well-maintained and equipped facilities, including a horse-riding course, transports you into a distinctly luxurious schooling experience. Located in the middle of bustling Noida, it is one of the top choices of parents from Delhi-NCR considering international education for their children.

Pathways was the first chain of schools to offer the International Baccalaureate (IB) continuum in India – comprising the Primary Years Programme (PYP), Middle Years Programme (MYP) and the Diploma Programme (DP). In fact, Pathways World School in Aravali off Gurugram Sohna Road was established in 2003 – long before the IB program caught on in a big way in India. This has given the chain a head start, and Pathways consistently ranks among the best IB schools in the country.

Dr. Shalini Advani, Director at Pathways Noida, reflects, “What makes a great school? It certainly is not beautiful buildings, comfortable, temperature-controlled classrooms or great sports facilities – although we have those. It is not easy access to advanced technology, to student laptops and interactive boards – even if Pathways has been a leader in that area. It is not an international curriculum, well suited to prepare children for a globalized world – even though we offer the IB programme.

“What matters in a school is its heart...its conviction that a school must prepare each child to be the best that she or he can be. The recognition that different children excel in different ways and that for one person, being an outstanding soccer player is as important as being a brilliant mathematician is for another.”

This vision is evident in the Multiple Intelligences Approach developed Dr. Howard Gardner from Harvard University, that is applied at the school. People learn in different ways. For example, some are more logical, some prefer audio inputs, whereas others prefer visual imagery. Teaching at Pathways involves identifying a student’s inclination and adapting lessons accordingly.

Class sizes are typically small and students are offered a wide variety of electives and projects to develop their interests. “Our school offers more than 30 options to students, so they can make choices based on their interest,” shares Advani.

Samiksha Gumbhir, who is in her final year at the school, corroborates, “I was initially studying in a CBSE school and joined Pathways in grade nine. The level of studies was the same, but the way we were being taught and tested was entirely different. There is no room for rote-learning in this curriculum and the teachers are always encouraging you to apply yourself. They are patient and willing to explain things in different ways till you understand.

Vanshika Goel, who is currently in the first year of the DP, says, “I have many friends from other international and CBSE schools and they’re always impressed by the thoughtful projects we get to do here.” She goes on to point at various professional installations exhibited on campus that were done as part of student projects.

Sparsh Ranjan, who is currently pursuing the final year of PYP at Pathways, adds, “We get to study different types of things at school. I learn Maths, English, Hindi, art, ceramics, dance, drama and music in school. We also have Unit of Inquiry (UI), which is a combination of many different subjects. Apart from this, there is Physical Education (PE), where we get to play different sports. But UI has been the biggest surprise for me. I’ve learnt to think differently because of it.”

Engaging with the wider world

School is a part of a wider reality of a child and while academics is important, it’s just as important for children to engage with the wider world. Pathways strongly advocates environmentalism and community practice, and its walls are plastered with messages on conserving natural resources like water.

Equally evident is the culturally-diverse mix of students and staff on campus. For instance, around 30 percent of the student population comprises children from different nationalities as well as Indian origin students with foreign passports.

Goel, who holds a British passport, says, “I’ve been in this school since grade four, when my parents first moved to India from the UK. It was one of the first schools offering the IB’s Primary Years Programme (PYP) and all the facilities one would typically find in schools overseas.”

It’s also interesting to observe how the school’s international vibe is tempered with local flavour. For instance, lunch in the canteen is a hearty Indian affair with daal, subzi and dahi on the menu. But there is always one continental dish and a salad bar. However, no outside food is allowed on campus and all students and staff sit together and eat the same food in the canteen.

Similarly, the library has an enticing collection of literature from around the world as well as from different corners of India. Apart from English, it also has an assortment of books in different Indian and foreign languages.

A common refrain about IB schools like Pathways is the high cost of education. The top-notch academic and extra-curricular facilities on-campus do explain this. However, Advani states that in India an IB education comes at a price because it’s entirely private and needs to meet the exacting standards of a world-class board.

“Many countries in Asia, such as Malaysia and Indonesia, have recognised the merit of IB and absorbed and adapted it into their national schooling system. This is not the case in India and schools that meet the IB criteria for affiliation need to charge accordingly. For instance, we have an ongoing professional development programme for our teachers, so they continue to learn and get exposed to different facets of this evolving curriculum.”

To prevent cost from coming in the way of meritorious students, Pathways awards between 10 and 12 scholarships every year.