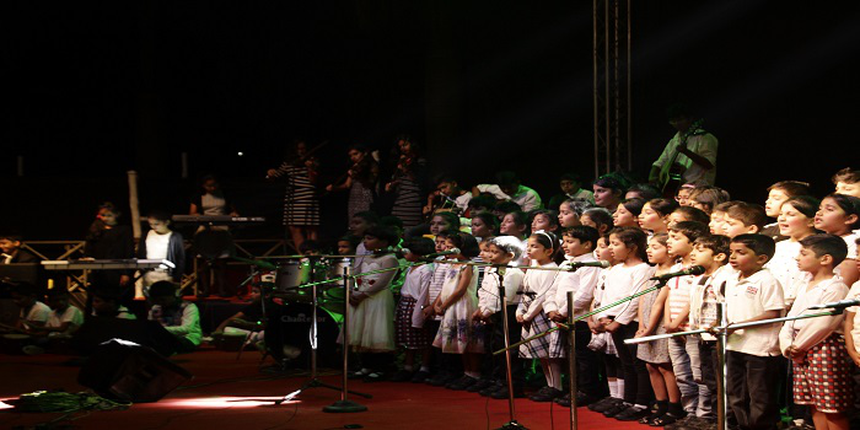 Pune’s Vishwashanti Gurukul is creating international citizens in the tradition of the Guru-Shishya Parampara. Read on to know more.

The campus of the Vishwashanti Gurukul on the outskirts of Pune city is spread over a green stretch of 125 acres. A massive land is of enormous importance to the international school because learning happens not only in modern classrooms, but also in the ashrams spread over the campus.

The school lives by its name by blending the ancient gurukul system where students sat with their gurus under trees with the western system of education. A main component of the school’s faculty is a Value Education team. “We imbibe what is best from the West while retaining the Indian values,” says Principal Venu Gopal.

Situated in Loni Kalbor, about 15 km from the city centre, Vishwashanti Gurukul was founded in 2006 by a group of teachers from Maharashtra. First the group registered a society, Maharashtra Academy of Engineering Education and Research (MAEER). The society was aimed at developing professional education facilities to train young students and provide dedicated and skilled professionals to serve the country. The society led to the birth of the Maharashtra Institute of Technology, also situated in Loni Kalbor. The Vishwashanti Gurukul soon followed as its founders realised the answer to today’s conflict-ridden society is to create a community of value-filled young people. “Our founders envisaged the creation of a peace loving community,” says Gopal, who joined the school as a math teacher.

The school, a day-cum-boarding institution, follows the International Baccalaureate (IB) programme. “We have Indian values at the heart of our school, but with a global reach,” says Rama Shinde, the Primary School Principal, who also heads the Value Education team. “It is East meets West,” she said, reflecting on the global outlook firmly rooted in Indian ethos. The school runs Primary, Middle and Diploma programmes for its IB students. Currently, there are as many as 150 students in the IBDP programme while the total strength of the school is 618 students and 102 teachers.

The campus also hides an interesting history. The land once belonged to the legendary actor Raj Kapoor. After it was sold to the Gurukul, the school has kept Raj Kapoor’s bungalow intact along with a memorial. The land is full of trees. The legend here is that Raj Kapoor planted a tree for each film he acted in.

According to the Principal, knowledge can be used in a constructive or destructive manner and the school is trying to nurture the intellect that distinguishes between good and bad. “We are happy that we are producing students with sensibilities,” he adds. Divjeev Sabharwal, an IBDP graduate of the school from Nagpur, runs a not-for-profit organisation that helps acid attack survivors find jobs. Monish Shukla, another former student, has launched a waste management company to improve India’s poor standards in disposing of waste. In August this year, Sabharwal returned to the campus to deliver a TED talk.

Moving back to the ancient Indian education system that puts emphasis on values. “It can’t be taught,” says Shinde. “The students have to imbibe it themselves,” she adds. Students go to the ashrams on the campus and sit down for story sessions and go for nature walks. There is also morning yoga and jogging. The students also learn relaxation techniques. “It helps to de-stress ourselves,” says Gopal. “There is a lot of anxiety among us today because of the conflicts in the world,” he says.

According to the school, the guru-shishya parampara is an inevitable part of education in the ancient Indian culture. Therefore, the school considers the emotional, intellectual and spiritual interaction between students and teachers an integral part of education. The school believes that in the modern world, Indian students need to be equipped with the latest instructional technology in the ambience of the gurukul system.

The emphasis on Indian values is evident even in the architecture of the school complex, which relies on traditional style with intricately carved entrances and pillars. The facilities are state-of-the-art with an art centre allowing the students to develop their aesthetic sense through classical dance and music. A well-equipped sports centre helps the children excel in their choice of games like archery. The school has also embraced the IB philosophy of Creativity, Action and Service (CAS). The school’s IB Diploma programme has CAS at its core to help the children become peaceful and caring individuals of the future.