Tradition that blends with innovation 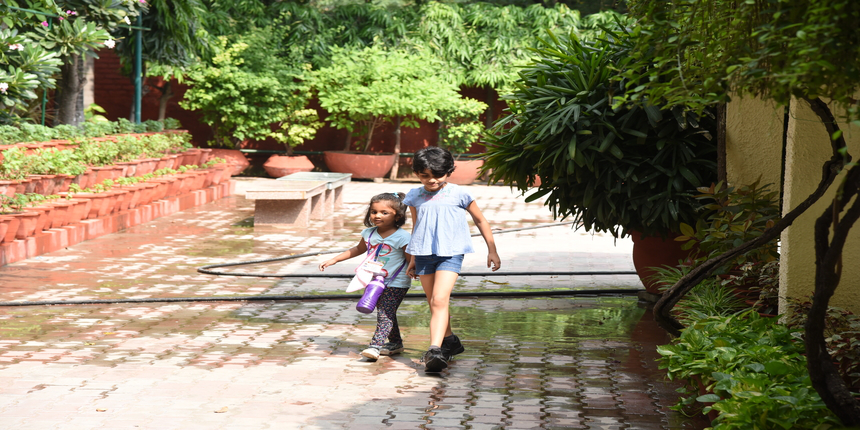 It is one of Delhi’s top-ranked CBSE schools, but within its time-honoured tradition, there is little room for ranking and comparison. There are no formal exams till Class VI, competitions are judged on benchmarks and all students achieving it are awarded certificates. There are no first or second positions, even in sporting events, and every student gets an A – although it might be an A5 instead of an A1!

One wonders if such an approach works in a highly competitive world, but then, the school has an enviable track record in terms of its class XII scores and alumni achievements.

As Principal Anuradha Joshi puts it, “We’ve never fit into the popular idea of an English medium Indian private school. Our strength is our sound pedagogy that has withstood the test of time.”

When children join the school in the nursery class, they spend the initial two years immersing themselves in the school experience. Tulika Kakkar, an alumnus and nursery teacher, explains, “Just beginning to come to school is a big change in a child’s life and for the first two years, we try to give them as much space as possible, while sticking to a plan. The day usually begins with free play, when they can do whatever they like under the watchful eye of a teacher. After that I sit down with them, mark attendance and we talk about different things. They are taught different concepts such as shapes and colours and encouraged to express as freely as possible. For example, when we start teaching them the English alphabet, we don’t begin with A. We pick up an easier letter, like l, and we learn it phonetically and think about its shape. We don’t just write the letters on paper, but also draw them on the mud and play around with them.”

The teacher is a constant companion during these years. “We eat, sleep, play and learn together,” says Kakkar. After nursery, the school only accepts new students in Class IX and Class XI.

At SPV, freedom to explore is not restricted to the nursery classes. A famous anecdote from the school relates to a student who, when he was in class III, was found skipping class to gather worms in the garden. Instead of berating the boy, the teacher asked him to prepare a report on all that he observed. To everyone’s surprise, he brought out an entire book with minute details on the school’s environment! Moreover, he also stopped skipping class.

The simple act of allowing children to explore their interests and respecting their decision not only builds their willingness to learn but also develops their sense of self-worth, encourages positive behaviour and an increasing awareness of one’s interests.

But how easy is it to encourage this freedom within the Indian system, especially since the school is affiliated to CBSE? “The system doesn’t dictate as much as we think it does. It doesn’t tell you how to teach and deliver in class,” says Joshi.

“Educationists around the world and in our country have emphasised on early education being conducted in the mother tongue and why it’s important to teach young children in native languages. So, we feel that we are ahead of the curve in India and the rest of the countries are coming around to our way of thinking,” elucidates Joshi.

While a few children do struggle because of the initial emphasis on Hindi and then the switch to English, they eventually come around with the support of their peers and the school. In fact, SPV has several notable alumni in the field of arts, science, media and literature, including writer Aman Sethi, and actors Nandita Das, Swara Bhaskar and Suraj Sharma.

Sukanya Banerjee, a middle-school English teacher and alumnus, remarks, “There are indeed some idiosyncrasies you might find in our students, for instance, many of them, especially in class VI, chant and count in Hindi and call tables pahade! Their language logic also tends to be Hindi oriented. But within a year they settle in. The school also offers special classes for those who need more help.”

Kakkar adds, “In many homes children speak Hindi, while at school they are taught in English, and Hindi is a separate subject. They take a little time to adjust like they do in all schools and soon become effectively bilingual. It’s the same at SPV, except that we begin with Hindi.”

In the middle school, children need to pick a fourth language out of Gujarati, Bengali, Tamil and Urdu, which they learn till class VIII. Banerjee reminisces, “I am a Bengali, but in middle school I took Tamil and during the four years of middle school I learnt to effectively read, speak and write in it and can still do this.

“Every year in December we have an activity week, where children read out passages, sing songs and put up plays in all the seven languages. They are exposed to a rich diversity of language literature in the country and get a great opportunity to hone their hold over it.”

The school also inculcates a healthy reading habit in its students. “Apart from the regular library, we have a class reading list. From class II till class IX, every month the children are given a book to read and at the end of the month, they discuss it in class. By the time they’re in class IX, many of our children become avid readers and extend their learning beyond the textbook.

“Even in these technologically-advanced times, when it’s very common to find children hooked on to their digital devices, research shows that reading a book is more advantageous,” explains Joshi.