Social wellbeing at the core 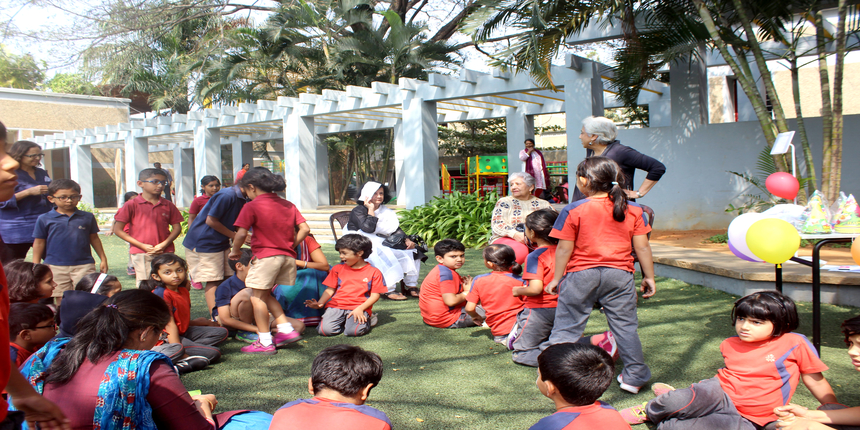 Mallya Aditi International School, Bangalore, has a legacy of over three decades of guiding the young generation for a better world...

On a Monday afternoon, Principal Sathish Jayarajan is busy meeting parents. The Principal of the Mallya Aditi International School, Bangalore, is the Higher Education Adviser of the school situated in Yelahanka New Town, a suburb in the city. ‘’It is important to give good guidance,’’ says Jayarajan, who also teaches Political Science in Class XI and XII and Economics for Class IX and X.

Teaching senior students makes it easy for the Principal to lead the school’s efforts to find the best placement for its wards. “I know the children,” says a confident Jayarajan. “It is easy to give good advice when you know them.” The Principal’s leadership in career counselling is built on the school’s philosophy that each student learns differently and that these differences must be acknowledged and supported.

“There are so many options for the students,” says Jayarajan. “But it is important to build the awareness because each person is different,” adds the Principal, whose career counselling helps in securing placements in India and other countries such as Canada, the United States, the United Kingdom, Singapore, Hong Kong, the Netherlands and France. The school’s counselling team and Learning Support Laboratory address the differences of individual students. Members of the school’s counselling team are known for their research and presentation of papers at national and international conferences.

The school, run by the not-for-profit The Ujwal Trust, follows the ICSE/ISC curriculum. There are     600 students and 100 teachers. ‘’We follow the small school concept,’’ says Joel Kribairaj, Admissions Officer and Chief Examinations Officer.

Founded in 1984 by educators Anne Warrior and Geetha Narayanan and a pioneering group of committed teachers and parents, the school strives to create a learning environment that is child-centred, international in perspective, engaging, active and critical. Its ways of working are democratic and decentralized. The school celebrates student and teacher-led initiatives and values creativity, excellence and a social conscience.

Community connect is an integral part of the campus culture. A sense of community and social conscience lie at the heart of education at the school. The Aditi students are collaborating with the Spastics Society of Karnataka and are also involved in community work with the HelpAge India, Samiksha and CRY. Senior students have launched a project to teach students at the Indira Gandhi International Academy, a school for the children of Sri Lankan refugees and a government primary school in the city. The Class XI students of Aditi recently painted a government school in nearby Hoskote village and provided shelves to the school.

Creative and performing arts is an integral element of education at the school, which believes that art, music and drama are not extra-curricular but an entitlement of all students and, profoundly related to learning.

The school’s innovative Creative Arts Department has produced critically acclaimed plays, musicals and concerts. The department has led several initiatives to integrate creative arts into several other parts of the curriculum, which has led to the creation of riveting learning experiences on the campus of the school, which prides itself as a ‘community of learning’.

“We are trying to introduce the creative thinking component in all subjects,” says the Principal. The Aditi teachers are constantly engaged with the students in their different subjects to develop in them a sense of critical enquiry. Questioning conventional wisdom is common in Aditi classrooms. Last year, the Aditi Institute hosted Infosys co-founder, Nandan Nilekani, who delivered a talk that focused on the prospects of a “Digital India”.

The school, which believes in learning from each other, has exchange programmes in Germany and Sweden for students. A teacher-only exchange programme exists with the United States. In the ISC examinations last year, Aditi students secured the first and second places in Karnataka. At Aditi, students are constantly encouraged to test theories, prove concepts and validate hypotheses.

There are five comprehensive laboratories, one each for Physics, Chemistry, Biology and two for Computer Science. The physics lab has a separate dark room which doubles as the school’s photography studio. Many meaningful group projects in the sciences are assigned to students with clear but open-ended guidance from the teachers. This gives students a chance to experiment together and so learn cooperatively, a skill that is irreplaceable in today’s world.

The Crafting Table, a non-profit organisation run by two Class X students of Aditi, recently visited the city campus of People for Animals and donated 6,700 rupees for rehabilitation of injured animals. The organisation sells handmade arts and crafts from 100% recycled or wasted materials at exhibitions and fairs around the city. The Mallya Aditi Avitation Club is another student initiative to introduce students to the field of aviation.

Student council elections at Aditi mirror the strengths of the country’s democratic traditions. The elections are held for all classes from grade 4 to 12. The elections this year were held in June. Students standing for elections made campaign speeches and students had the chance to participate in a democratic process. The votes were counted by the class teachers and the results announced the same day.

Aditi’s ICSE/ISC results this year have been among the best ever. Two of the ISC students turned in among the best two performances in Karnataka. In ISC, the school was among the top performing schools in the country. In ICE Diploma, there were 20 distinctions in a cohort of 27. The results show the school is on track to achieve its vision of grooming exceptionally confident students.