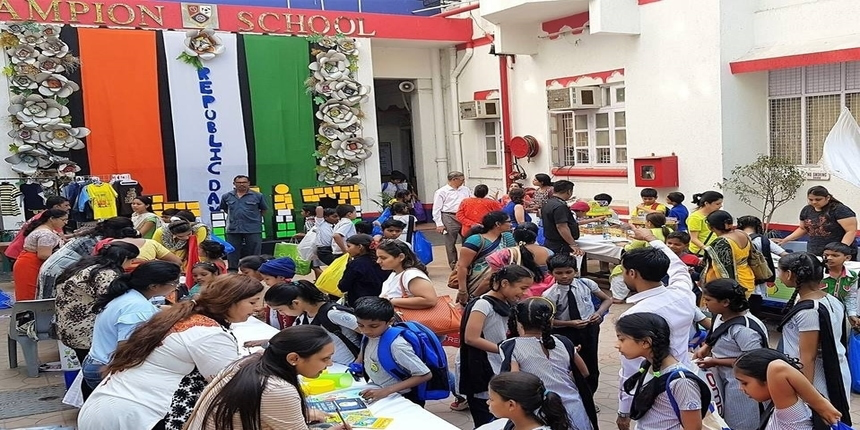 Founded in 1943 in the historic settings of Fort, Mumbai, the Campion School is an institution that has contributed immensely to nation-building. Many of India’s top industrialists and politicians walked the school’s campus facing the sea. The Tata Group’s JRD Tata was a student of the Campion School. So was industrialist Kumar Mangalam Birla. Congress MP and author Shashi Tharoor sat on the Campion bench, so did former Union minister Praful Patel.

“There were only two schools in the Fort area in those days,” says Paul Machado,the modest Principal of Campion School. “There was John Connon School and there was us,” adds Machado, who has been the principal for the last 15 years. The school, situated in the precincts of the Mumbai heritage buildings, was set up by Jesuit missionaries and named after its patron saint and British Jesuit priest Edmund Campion. It started as a primary school in the Marine Lines from a small building, before arriving in the present two-block building. The Fort campus is only one of the three Campion schools in the country. The other two are located in Bhopal in Madhya Pradesh and Tiruchirapalli in Tamil Nadu.

The school, which has a neighbourhood-friendly policy in admissions, caters to the nearby Colaba and areas around Fort. Students are from different economic backgrounds, poor and rich sitting together wearing the same uniforms. “There is uniform and uniformity,” jokes Principal Machado, who teaches geography. There are as many as 40 children from underserved communities studying at the school on scholarship every year.

The school, which is accredited to the ICSE Board, has classes up to Grade 10. There is a total of 830 students and 49 teachers. Many of Mumbai’s senior secondary schools eagerly wait for Campion students to join them because they are the city’s pride. This year, the highest scorer of the school received 98.4 percent and 44 of the 67 boys, who appeared in the Council examinations, got a 90-plus percentage. The school average was an outstanding 92.2 percent.

The school, which is celebrating its Platinum Jubilee this year, has embarked on a unique social service action to mark the occasion. “Our PTA Social Service Committee will implement 75 ‘Acts of Kindness’ during the Platinum Jubilee Year,” says the Principal. The Platinum Jubilee celebrations, which started in December last year, have already witnessed 46 such “Acts of Kindness”. “The initiative includes sensitising children about the millions of those young children who are left out of education. Teaching science and mathematics to children from poor families is one such step,” he added.

Educational kits were supplied to poor children in December last year and they were invited to the famous Cricket Club of India in Mumbai for a Christmas evening. In January, the school collaborated with the Terry Fox Run to raise nearly 10 lakhs rupees. Nearly half of that amount was contributed to the Tata Cancer Education Fund for Children. In February, the school tied up with the voluntary organisation, Chirag Foundation, to donate solar lamps to eight families in Dhanu, Mumbai. Scholarships to children who live on the city’s pavements, children’s books and toys for patients of Wadia Hospital’s Centre for Children, and art competition for municipal school children were among other initiatives.

“Our Parent-Teacher Association is very active,” says Principal Machado. A strong tradition of former students connecting with the current generation is a highlight of the school’s aim to prepare its pupils to serve the society. Many former students return frequently to their old campus to talk to the students. When there is a career fair at the school, there are plenty of experts, incidentally all former students, to come and counsel. Recently, one of such visitors was advertising guru, Ramesh Narayanan, president of the Indian Chapter of International Advertising Association. “The children ask questions to the experts and are always eager to know how Campion helped them in their lives,” explains the Principal.

An emphasis to high ethical standards is a priority on campus. A sense of moral and ethical behaviour in today’s conflict and distrust was the topic of one of the talks held in the school recently. Principal Machado believes in the significance of school assemblies, which he sees as an integral part of learning. “We have theme-based assemblies every month,” he says. In September, the theme was ‘Respect’. Another such theme was ‘Religious Intolerance”. “Children spoke about it in the assembly,” adds the Principal. In August this year, the school students took upon themselves the responsibility of organising an inter-faith dialogue on the campus. Representatives of the civic society and religions came to attend the dialogue. Partnerships with voluntary agencies are established for awareness programmes on the campus on important subjects such as child abuse and drug addiction.

Exchange programmes by the school with the Colegio San José Villafranca, Spain and another school in The Netherlands encourage students to learn from each other. The Campion has a twin school, a rural school in Talasari, Maharashtra, an area populated by the tribal community. Campion students regularly visit the rural school to teach its students while the rural school students come to stay and study in Campion. Recently, the Campion school helped the Talasari school build a Chemistry laboratory for themselves, their first.