Sri Aurobindo International centre of Education prepares children to take charge of their learning, growth and life. The students pursue their passion in a free environment. Read more to know about the school where no faculty is paid for teaching and no students pays the fee to get educated.

A century ago, Sri Aurobindo left Calcutta for Pondicherry, saying he wanted to pursue a greater inner freedom for the humanity. The revolutionary, who had been at the forefront of the independence struggle, felt the national movement for freedom from the British rule had already taken off and he could fix his eyes on a landscape larger than a country. Sri Aurobindo came to Pondicherry, creating an inspiring world around him in a quiet neighbourhood near the Bay of Bengal. An ashram grew organically around him and from the ashram was born a school with its heart made of the ideas of the great soul. 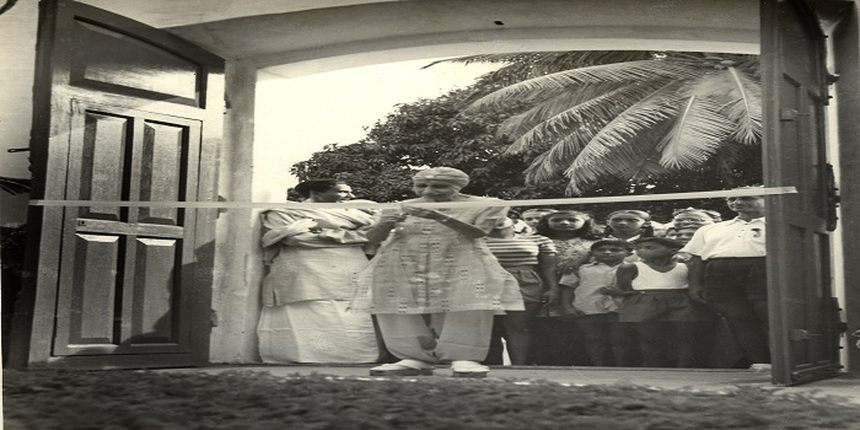 Freedom is at the centre of the philosophy of education at the Sri Aurobindo International Centre of Education in Pondicherry founded in 1943 by Mirra Alfassa, known as the Mother, based on the vision of Sri Aurobindo---education for a new kind of personality. At the centre, the students choose not only their subjects, but their teachers too. The students can also create their own timetable of learning at the school. There is no examination and no grade is given.

The Sri Aurobindo International Centre of Education runs classes from kindergarten to college. Local residents call it ‘The School’. The school draws its inspiration from the Sri Aurobindo Ashram, which is spread over the French Quarter of the Pondicherry town lying close to the Bay of Bengal. The ashram traces its origins to the year 1910 when Sri Aurobindo came to Pondicherry after leaving his revolutionary struggle for independence. The Mother, who came to Pondicherry in 1920 to live in the ashram, founded the school initially for a small community of people who had arrived in Pondicherry from Eastern parts of India worried about the impact of the ongoing Second World War on their children.

“The Mother worked towards a different kind of education,” says Devdip Ganguly, a member of the faculty of the Sri Aurobindo International Centre of Education. “The school prepares the children to take charge of their learning, growth and life,” says Ganguly. “We want to create an atmosphere where students can pursue their passion in a free environment,” he adds. The Mother aimed for creating a multicultural environment through the link between the school and the ashram.

The school is multilingual, helping the students to be proficient in English, French, Sanskrit and their mother tongue. The Senior Secondary level of the school is considered a crucial age at the school. “The students at this level start taking responsibility of their education,” says Ganguly.

The Higher Secondary syllabus is moulded on different Indian curriculum. The school, which doesn’t follow International Bacculaureate, ISC, ICSE, CBSE or any other programme, has its own boards for creating the syllabus for different subjects. Besides the four languages that every student has to learn, there is physics, chemistry, biology and maths. There is also music and dance, considered by the school as central to learning in a free environment. The class size varies from eight to nine students, with about 50 students at the Higher Secondary level. The school, which has a total of 500 students, has over 200 teachers, all volunteers, receiving no salaries.

“None of our faculty is paid to teach,” says Matriprasad, another faculty member. “Our students are also not paying to learn. Will you charge your own children?” he asks. There is, however an annual subscription of Rs 1,000 every student pays to the school. Students receive notebooks and other study material free of cost. The school functions through the week, with Sunday set aside for activities. There are no summer or winter breaks though there is an optional one-and-a-half month holiday. “It is like the old system of how you put your children in an ashram,” says Matriprasad, a former student, who was selected as a school teacher when he was in the second year of college.

After the Higher Secondary, the students proceed to the college level for another three years of education. “We have been recognised as an Experimental School by the Government of India,” says Ganguly. “Sri Aurobindo was against mainstream education.” In view of its special nature of education, the Government of India has allowed the students to sit for any Union Public Service Examination based on the eligibility. After Class XII, a certificate is issued to the student to facilitate outside examinations.

Samir Sarkar, an alumnus who was the line producer for Ang Lee’s Life of Pi shot in Puducherry, says there is a “huge scope of self-assessment in the school.”Life of Pi, the Booker Prize-winning novel, was born in the Aurobindo ashram, when Sarkar’s uncle told its Canadian author Yann Martel the story of ‘Pi’ Patel, the boy from Puducherry.

The school gets its teachers and students from all over the world. Journalist Nandini Sengupta and her London-based investment banker-husband came to Puducherry in 2007 and returned three years later so that their three-year-old daughter could become a student of the Sri Aurobindo International Centre of Education. “We packed our bags and came here,” says Sengupta, who was drawn by the diversity on the campus. “When they go to the school, irrespective of their backgrounds, the students are one,” says Sengupta. “There is also an old world frugality. There are library books that go back to the ‘50s. And the school is a community,” she adds, which reflects the fact that more than seven decades after the school was born, its core values are intact.