Discovering the genius in a child 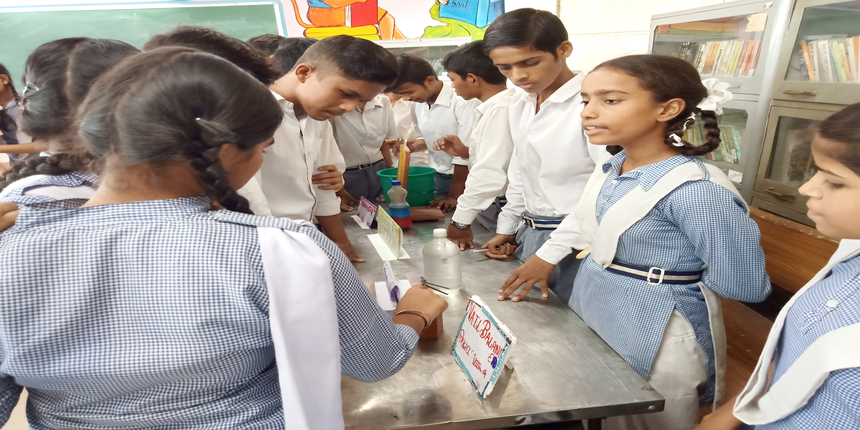 Do we as parents, teachers and responsible citizens foster curiosity, an essential ingredient to ignite the desire for learning, in a child?

How come small plants come out of cracks in a wall? Why are ripples formed when you throw stones in water? These are some of the questions children are often curious about. Many a times, they go answered. Right answers would have made them think deep. “We experimented with leaves, smeared vaseline on it and kept it in sunlight after wrapping it with polythene. After sometime we saw watery substance on the polythene…that is, water was coming out of the leaves,” says Tanishq, a 6th standard student at government-run Sarvodaya Vidyalaya in Mongolpuri in northwest Delhi, wondering how it happened.

Providing right answers to Tanishq and students like him can develop them into bright scientists in future. However, if they remain unanswered, their curiosity will die down. Thankfully, many schools have now realised the need to ignite curiosity in children to unearth their hidden talent.

“We do come up with concepts so that the students are able to understand the underlying principles of working and construction of a model and thus relate to them in real life situations. These things help in developing the scientific attitude and scientific temperament,” says Meena Jha, who teaches science to high school students of Ved Vyas DAV Public School, Vikaspuri. “Learning by doing always arouses interest, builds confidence and felicitates long lasting learning,” she adds.

Adding to these private schools, a few organisations are also extending their bit, working in government schools in India for igniting curiosity in young minds. Agastya International Foundation, an organisation started by Ramji Raghavan when he returned to his motherland after two decades of successful career in international finance, has been working for instilling curiosity in children in both urban and rural settings for the past 18 years. The strategy was to use low cost and easily available equipment for awakening scientific curiosity.

“When we see something beautiful, something unexpected -- it can be the dew drop of a leaf, a beautiful painting, or a wonderful piece of sculpture -- it can be an interesting counter-intuitive science experiment. You wonder what happened and that is very important because you did not expect to see what you saw. Your mind is awakened, curiosity is stimulated and that is really important because that is the foundation of enquiry, that is the foundation of learning,” says Raghavan.

The initiatives of Agastya are spread across the length and breadth of the country, starting from south to northern states to the remote North East. “Earth revolves around the sun, what about the sun? Does it move? So we created a model to show them that all celestial bodies in the universe move, even the galaxies move and all the planets and the satellites move with the Sun because of the gravitational force,” says Ranjit Jha, leading the Delhi division of the foundation.

The pedagogy that is followed in Agastya is in accordance with the curriculum followed in a particular state. Practical classes and models are prepared as and when the school is through with a particular topic.

“The best thing is that they make the models themselves and they learn. And then when they go back home they tell their friends and their parents. They show them the model also. So that is the difference between standard laboratories and Agastya Foundation. So not only the children but even their near and dear ones find it interesting.  We also don’t tell our students that today we are going to learn gravitational force or any such thing. The students do the experiments and try to find out what is the experiment all about,” says Shiv Chaudhary.

Janvi, a student of class 11th  along with five other children from Sarvodaya Kanya Vidyalaya, received the ‘Design for Change India’ (DCI) award for the concept ‘Mera dabba-tera dabba’ (‘my box-your box’), an initiative for sharing food in the schools. “We made a video ‘mera dabba – tera dabba’… after we came up with the idea of sharing our lunch. We did not keep the concept amongst us only, we shared it with the whole school, with children from primary classes to 12th class. We get bored of our home made preparations at times. So by sharing lunch with others, we get a change of taste,” says Janvi. It is a welcome concept as no child remains hungry and fosters a sense of equality, cutting across  the barriers of caste and creed.

Most of the schools are now emphasizing STEM (Science, Technology, Engineering and Mathematics) curriculum in their school syllabi. From kindergarten to 12th standard, the modules are developed in such a way that the system makes the child more adjusted to real life situation.

The central government has recently come up with measures to integrate STEM learning into the National Education Policy with the introduction of ‘Atal Tinkering Lab Solutions’ to create scientific temperament in students. This is an initiative under the Atal Innovation Mission (AIM) at NITI Aayog solely to foster curiosity, creativity and imagination in young minds. If such programmes strike the right chord, Sanat Malik, a 7th standard student of upscale Delhi Public School at R K Puram, could easily get an answer to his doubt -- “How can green plants grow indoors when they require sunlight to make their food?”